With a little more forethought, I could have come up with a clever title for this holiday movie theme I’ve got goin’ on. Something like Creepsmas, Xmassacre, or Happy Horrordays. Perhaps next year. For now, let’s have a look at Rare Exports: A Christmas Tale.

A research team discovers that the mountain they are exploring/examining is really a tomb or, more precisely, a containment facility. What’s being contained is Santa Claus, the real one, in a massive block of ice.

In fact, the “Santa” trapped is likely closest to the Finnish legend of Joulupukki (who lives on Korvatunturi mountain where the movie is set). In the legend, Joulupukki, the Yule Goat, or really, goat-man.

This might be linked to Thor and his goat-driven chariot, and it’s said that men would dress up with goat horns as part of a pagan celebration. Joulupukki himself looks very much like Santa but with goat horns. In the film, his Santa-like helpers cause all the problems.

I like Rare Exports. Lots. It’s a clever and slightly twisted take on two classic concepts: the mythology of Father Christmas and the creature feature. I don’t love it. It wanders too far from director Jalmari Helander’s original concept which can be found in the two short films that led up to the feature.

The first was Rare Exports Inc. (2003) which is really the premise of the 2010 feature. Father Christmases are in fact vicious, wild creatures that are captured, cleaned up, trained, then sold all over the world. No easy task. A good sized Father Christmas, for example, “would easily tear apart a fully grown bear.”

This one is so dark, so tongue-in-cheek, and so unflinching in terms of what happens to a Father Christmas gone bad that I’m sure it would deeply offend more than a big ol’ handful of folks.

Though I doubt they’d read this blog or watch these kinds of movies anyway. 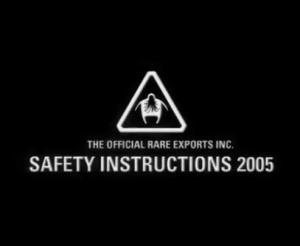 If Rare Exports Inc. is a little off center, then Safety Instructions is merciless. I don’t mean this in a graphic, gory, hack-and-slash sense. I mean Helander is beyond brutal in sharpening a nice holly branch and staking the entire Father Christmas concept right through its “Better not shout/Naughty or nice” tinsel-covered heart.

What makes these shorts so relentlessly hilarious is that neither is played for a single laugh. Ever.

They have all the look and feel of any well crafted industrial film (including the distinguished dread-and-gravitas inspiring voiceover courtesy of Jonathan Hutchings). In fact, for some true appreciation of what Helander is doing, have a peek at some industrial films. Hoptocopter is a good place to start.

This especially makes the opening of Safety Instructions even better: “Every year, we ship hundreds of these distinguished, extremely rare products to far away countries all around the world. Your mission is to guarantee a safe journey for the product from beginning to end. Last season, you failed.”

Again, I couldn’t stop laughing. It’s shriekingly funny in the same way as Max Brooks’s Zombie Survival Guide. Here’s another suggestion. Watch the feature first. Next watch Rare Exports Inc. for a look at where this all started. Finish with Safety Instructions.

Kinda like getting your dessert if you eat all your vegetables.

This is, of course, my completely subjective opinion and is no more or less valuable than yours or anyone else’s, but I believe you’ll thank me. Why? Because The Official Rare Exports Inc. Safety Instructions is one of the funniest damn things I’ve ever seen.

I for one couldn’t be merrier.