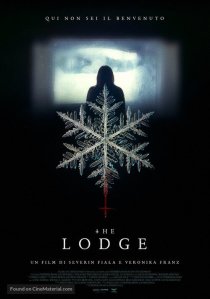 In order to maintain my continued interest in this extended project, it’s time to institute another new feature. Along with the now included Skull Scale, I’m tacking on a brief summary of highlights at the end.

This will be at the very bottom after the Skulls, so anyone who want doesn’t such information will know where to stop.

Admittedly, I absolutely stole this idea from Joe Bob Briggs, but I’m only listing the Body Count and not using any of his other entertaining categories like Breasts or the various “Fu” styles of weapon use.

Tempted as I was.

On to today’s movie, The Lodge. It’s interesting, and I don’t mean that in a  “damning with faint praise” or “trying to be diplomatic” sense. It very much held my interest. It’s well-paced, uses minimal gore or jump scares, and drips with menace.

Riley Keough is mesmerizing as Grace, a survivor of a cult’s mass suicide. Her fiancé, Richard (Richard Armitage), is a writer who met Grace while researching a book on cults.

Richard decides it would be a fine bonding experience for his kids, Aidan (Jaeden Martell) and Mia (Lia McHugh), to spend a couple of days with Grace in the family’s isolated cabin where he will join them for christmas. We know early on the kids don’t like Grace. Mia thinks she’s weird, and both make a point of not interacting with her.

This seems to marginally improve as the three of them watch movies one evening. Mia complains that it’s cold, so Aidan lights up the gas heater. Grace expresses concerns about its safety, but Aidan reassures her.

The next day, Grace wakes up to find that the power is out, there’s no water, the generator doesn’t work, the cell phones are dead, and everyone’s things are gone (as is all the food). Thus begins Grace’s tailspin.

It’s easy at first blush to suggest that Veronika Franz and Severin Fiala could have had a tighter grip on the plot here and there. Or it would be, except for the fact that they also brought us the disturbing Goodnight Mommy. Clearly these two know their way around a story, so there has to be a better explanation for why events unfold the way they do.

The first act comes as one hell of a jolt, and from there, we’re treated to a textbook slow burn. It’s tense and stylistic, and not until late in the game do we truly get a grip on what we’re dealing with. Is it a ghost story, a possession, a killer, or some combination thereof?

It’s fair to say, then, The Lodge works like a giallo, and if that’s the case, then it makes perfect sense for plot and character to take the occasional backseat to atmosphere. The big reveal may seem a bit subdued, even lackluster, but just wait as the end comes crashing down.