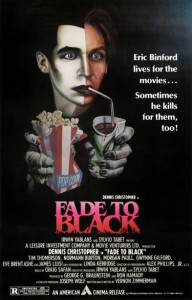 For a somewhat obscure, criminally underappreciated bit of slasher fare, you could do far worse than Fade To Black. Now, I’ll be the first to admit it’s not the most awesomest slasher flick ever made, but in its defense, Fade To Black also suffered from some timing and, I’d speculate, financial issues.

Everybody saw it. Most everybody loved it. But how many of us caught The Incredible Melting Man that same year?

Jump ahead to 1980, and something similar happens. Fade To Black runs smack up against movies trying to capitalize on the likes of Carrie and Michael Meyers, movies like Prom Night and Friday The 13th. Okay, there’s a little irony to be had. Friday The 13th had a budget anywhere from $550,000 to $700,000. It also thoroughly trounced the million+ budgeted Prom Night.

Both presented stiff competition for the quieter and in some ways more clever Fade To Black (which has become such a distant memory, I can’t even find its budget). All of which is a shame. As I said, not the greatest of its genre, but the acting is fine, and the beleaguered Eric Binford (Dennis Christopher, the bike-riding kid from Breaking Away) starts out as your stereotypically pathetic, likeable schlep. You feel sorry for him.

You also know revenge is coming, and this is why it’s a shame Fade To Black got lost in the slasher shuffle. It has much less in common with the masked knife-wavers and much more in common with two much earlier movies, , Peeping Tom (1960) and Willard (1971).

Both Peeping Tom and Fade To Black are steeped in the cinema itself. Mark (Carl Boehm/Karlheinz Böhm) is part of a film crew and plans to be a filmmaker in his own right. Eric works in a film warehouse and is a devoted if not slightly obsessed cinephile.

Like Willard Stiles (Bruce “Senator Robert Kelly” Davison), Eric is reclusive and socially inept. Their lives are almost interchangeable. Both reach their tipping points because of domineering but physically frail maternal figures. They’re both bullied by boorish, insufferable bosses. Both their fates are tied to the very things that allow them to take revenge. I have to wonder how accidental it is that they even look similar. 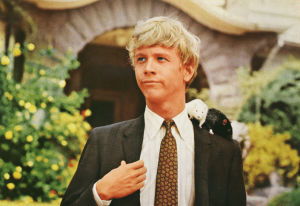 The MO of each character intertwined with his killing method. Mark uses a camera tripod modified to house a concealed blade. Willard uses his rats. Under the guises of his favorite characters, Eric uses his extensive movie knowledge to stage his kills like scenes from their movies, specifically Dracula, the Mummy, Hopalong Cassidy, and Cody Jarrett.

This is what keeps Fade To Black from being some formulaic knockoff as do several points where things take some unexpectedly dark turns. When Eric, made up as Dracula, kills a prostitute, he actually drinks some of her blood. There’s also a cringey scene involving a Marilyn Monroe poster.

That said, plenty of schlock to be had, including a silly, hamfisted attempt to parody Psycho and a fleeing victim who, despite adrenaline and utter panic, is incapable of mustering a stride longer than a foot and a half. Eric also does a number of impressions, most notably Cagney, that are frequent and awful.

So, 1980s, I’ll see your endless parade of Halloween knockoffs (some of the worst of which being its own sequels), and I’ll raise you Anguish, Psycho II, Sleepaway Camp, and Fade To Black.