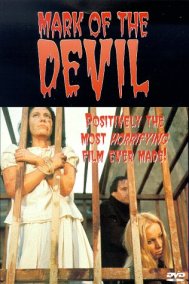 Gather round kiddies as I weave you today’s tale of superstition, paranoia, extortion, sexual predation, torture, rape, and other old time traditional “values” that can only be Michael Armstrong’s Mark Of The Devil.

Premise: a town is at the mercy of a brutal, sadistic witchfinder (as opposed to, y’know, the kindly, gentle ones) named, strangely, Albino (Reggie Nalder). The witch hysteria has reached the point that the church decrees local witchfinders alone are no longer sufficient.

Enter Christian Von Meruh (of course his name is Christian) played by a very young and mind-numbingly emotionless Udo Kier. Christian has come to facilitate the arrival of his mentor, the church’s infamous witchfinder, Lord Cumberland (Herbert Lom).

Christian asserts his position and the will of the church almost immediately. When Vanessa (Olivera), the raven-haired tavern keeper, defends herself from Albino’s molestations, she is accused of witchcraft.

Christian intervenes and saves her without so much as a-smudgin’ his kohl-rimmed eyes. Gosh. Didn’t see that coming either. Albino slinks away, tail between his legs. Gosh. He doesn’t look happy. I suspect reprisals.

I have deep conflicts with this movie. On one hand, it’s not without its merits. Cumberland strangles Albino in front of Christian. Thus begins Christian’s crisis of faith and his service as, for a while anyway, a visual figure of Cumberland’s conscience.

He never denounces or even glowers at Cumberland in these scenes. That’s later. Kier’s astonishing lack of affect in this context serves him and the movie well. He becomes the silent, hovering specter of Cumberland’s guilt.

The heroine, Vanessa, is the only woman (in fact, one of the few characters in general) who has any sense of agency. She lashes out verbally and physically at those who would persecute her and, more importantly, gets away with it.

On the other hand, there were some bizarre choices made. Case in point, an opening chase scene that ends in the rape of two nuns by a band of thugs.

In the first three minutes.

The soundtrack for such brutality is lyrical and syrupy. As much as I want to believe this is ironic counterpoint, I can’t. The score is, well, just too weak to pull this off, and any attempt at irony has, in keeping with the movie’s them, all the subtlety of a beheading.

Another problem is with the accused witches, almost all young, attractive, blonde, pale, and of flawless dentition. While it’s true that being young and pretty was dangerous during the witch craze, being old and ugly had its perils as well. Oddly, nobody in this film is old. Nobody.

Let’s talk torture. This supposedly earned the film a so-called “V For Violence” rating and got it dubbed “the most horrifying film ever made.” Uh, no. Just in purely splatterific terms, I only need three words: Herschell. Gordon. Lewis.

To paraphrase Junot Díaz, Mark Of The Devil was Eli Roth before Eli Roth was Eli Roth. But so was A Taste Of Blood. And Color Me Blood Red. And Two Thousand Maniacs. And Blood Feast.

The only completely naked torture victim? Yep. Female. On the rack no less.

And while I wholeheartedly applaud the pages torn from the William Castle playbook (namely handing out vomit bags), let’s not kid ourselves. I mean, “Guaranteed to upset your stomach?” Sorry, nary a hiccup. Is it just me maybe?

But let’s end on a quasi-positive.  One final thing I really enjoy about Mark Of The Devil: the ending. Pretty damn cynical. I’ll try not to divulge too much other than to say there is no reckoning, no redemption, and nobody learns a damn thing.

BODY COUNT
3 onscreen
(that I can remember–gotta watch again)