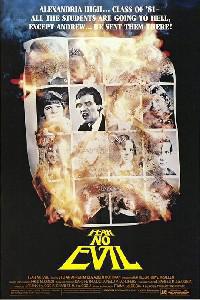 1981. A banner year for horror movies: Evil Dead, Friday The 13th Part II, Ghost Story, The Howling, Possession, Scanners. Okay, okay, it was also the year of, well, Evilspeak, Galaxy Of Terror, Inseminoid, and Piranha II: The Spawning (truth be told, I kinda love Galaxy Of Terror. And Evilspeak. But we’ll discuss that some other time).

Possession/demons loosed from hell/human embodiment of Lucifer angles have never done a whole hell of a lot for me in general, but what sixteen-year-old nerd doesn’t relish a good tale of wreaking havoc on the student body?

There is, however, the occasional exception. Don’t get me wrong. I dug this in 1981. Still do. But plot holes, wooden acting, laughable special effects mean Fear No Evil is flawed. Deeply, troublingly flawed.

For example, it’s apparently really damn important that the archangels Raphael, Michael, and Gabriel all be “in body” to take on the embodiment of Lucifer. However, Tom, the priest serving as Raphael’s vessel, dies. He still communicates with the other two, and in the final scene, though not in body, somehow manages to reunite with them for The Big Showdown.

The ending is, shall we say, abrupt. The only movie I can think of at the moment that comes to such a screeching halt is Beast From Haunted Cave.

And sure, drug use/teen sex/death comes pretty standard, but that doesn’t make Fear No Evil your run-of-the-mill slasher flick either. There are very bright spots. Zombies, for instance. Or the alpha male antagonist who suddenly finds himself with female breasts. And who doesn’t love a good death by dodgeball?

Stefan Argrim is an interesting teenage Lucifer. On one hand, he seems to have no qualms about using his power to his advantage. On the other, he’s your standard, awkward, angst-fueled high school senior. He seems both surprised and troubled, for instance, over the aforementioned dodge ball incident.

Andrew is also capable, it seems, of arousing the desire of the female lead, Julie (who doesn’t know she’s Gabriel yet) by “accidentally” touching her while handing her a book. Ironic that he never capitalizes on this ability with, I dunno, every girl in the school. I mean, Lucifer right?

Finally let’s have a look, or more to the point, a listen, to the true star of Fear No Evil: the soundtrack. Yes, on a timeline this is an 80s movie, but this is not an 80s soundtrack. It’s rife with tracks that came in at the very tail end of the 70s and were on their way to becoming cuh-lassics in their own right.

I mean come on.

At one point, Andrew/Lucifer stands on a stairwell looking down on the school parking lot while up swells the menthol-cool stylings of Johnny Rotten: “I am an anti-christ-ah! I am an anar-chist-ah! Don’t know what I want, but I know how to get it!”

Subtle? Not so much. Appealing? Of course. If you think about it, sums up our little Andrewcifer pretty nicely as well.