Confession time. I thought I had this one figured out about fifteen minutes in, and it was with good reason my cinematic hubris was aroused. Sun Choke displays many of the hallmarks of the finest films in the Grande Dame Guignol tradition.

Check. Irma (horror staple Barbara Crampton) is the therapist and caretaker for Janie (Freaks And Geeks’s Sarah Hagan). Irma is every bit at nurturing as Nurse Ratched, at times flat out torturing Janie. We also see evidence that she has been abusing Janie most of her life. 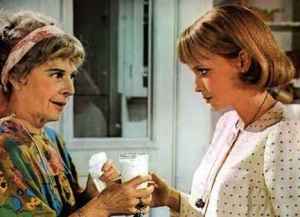 Check. Irma constantly infantilizes Janie, often referring to her as “little girl,” and has her on some truly bizarro psychological and nutritional regimens. Me personally, seeing Irma hand Janie a smoothie also takes me directly to Rosemary’s Baby. I’m sure that’s no accident.

Check. Like the dark pasts in What Ever Happened To Baby Jane, Hush…Hush Sweet Charlotte, or Strait-Jacket, we don’t know exactly what Janie’s condition is or what caused it. The difference here is that we never find out. In this case that actually works well.

Check. Janie takes increasing liberties with the scant freedom she is given, but these meet with dire repercussions.

5) At least one murder

Giant red check, but also where Sun Choke takes a hard left. I was fully prepared to end this review with praise tempered by disappointment: praise over the treatment of these classic Grande Dame Guignol themes, disappointment that no new ground was broken in terms of plot.

I am so happy to admit that I was so wrong.

Without getting too specific, what I expected to happen is exactly what happened, but it was far sooner than I expected. From there, the plot goes into a psychological tailspin. In order to avoid any spoilers, I’ll just stop.

As Janie, Hagan is disconcerting. She has this little girl voice that masks her cunning, violence, and lack of remorse. At the same time, she’s fascinating. We can’t help being on her side, especially after the events of the first fifty minutes of the film.

As for Barbara Crampton, what can I say? I’m a huge fan, from Re-Animator and Chopping Mall to We Are Still Here and Beyond The Gates, I’ve been watching her in horror movies for a good long time and will happily watch any movie she’s in.

As for Sun Choke, she is delightfully evil, perhaps a less aggressively volatile version of Annie Wilkes. There’s nary a scene with Irma in which she appears to harbor anything but resentment and malice for Janie.

This becomes clear only a scant half hour into the film when Irma says, “When your mother died, I made a promise to your father. That promise means I’m going to spend the rest of my life worrying about you and caring for you whether either one of us likes it or not.”