“Before you embark on a journey of revenge, dig two graves.”

Supposedly Confucius said that, but there’s no definitive evidence. It was most assuredly not Jodi Picoult. Either way, probably good advice.

Thing is, it’s not so very much fun. Warnings against revenge generally aren’t. It’s also the problem I have with movies like Willard, Carrie, Massacre At Central High, or Fade To Black. On the surface each seems like the swift hand of justice. The rightful execution, as it were, of karma.

Don’t get me wrong. I love these movies, but they all live up to the “two graves” formula. It’s disappointing. Deep down, many of us delight in merciless punishment meted out upon the abusive, the entitled, the arrogant, the willfully stupid. Especially if that punishment involves a blade, a blunt instrument, or some more creative delivery mode.

Secretly, however, many of us also enjoy seeing the person dispensing this vengeance get away with it. For those of us here at Castle Blogferatu, maybe not so secretly. And that brings us to… 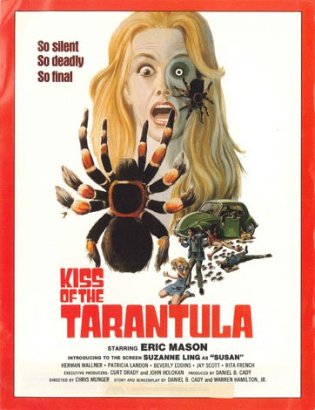 I don’t do it often, but I want to quote someone on this. Here’s Adrian J. Smith over at Movies And Mania (one of my new favorite sites).

Despite the fact that Eric Mason’s morally-vapid Uncle Walter detective character is seemingly going for a bizarre world record for the number of times he can say ‘Susan’ during the movie, Kiss of the Tarantula is slightly more endearing than some of the other reviews here give it credit for, provided that you are in the mood for its languid 70s rural ambience.

The central premise owes a major debt to Willard and Carrie yet the understated sleazy elements and the funeral parlour setting add welcome touches of creepiness. Ultimately, the lack of outright horror lies with the slowness of spiders to attack their victims thus reducing the kill sequences to an arachnid’s pace.

Smith makes several observations worth discussing. First off, I agree with every word of the first paragraph. I couldn’t have said it any better, so I didn’t. I especially love “languid 70s rural ambiance,” while the sleazy uncle might easily have enjoyed a career in either the political or eccleisiastical sector.

I’m also on board with the slowness of the spiders. One victim dies of fright when he’s cornered in an air shaft by a big ol’ heapin’ heppin’ of the fuzzy li’l suckers. But this does bring up two problems. One is personal. I kinda dig tarantulas which tends to interfere with my ability to be afraid of them.

The other problem is the obvious question, “Why not just crawl back the way you came in? Y’know, like, over them?” Oh sure, you might have to brush some of them aside, maybe squish a few along your way, but they’re tarantulas. Generally not lethal.

I know somebody who has this personal rule that critters are okay as long as they don’t have more than 4 legs or fewer than 2, so I asked her about this scenario. She said she’d get out just fine. Okay, to be fair, if you’re arachnophobic, you’re in deep shit, but there’s no mention of this.

And here is where I part company, at least somewhat, with Movies And Mania. Of course there are revenge parallels to be drawn between Kiss Of The Tarantula, Willard, and Carrie. Like Willard, Susan (Suzanna Ling who went on to, well, nothing) uses critters that are already inherently creepy. Like Carrie, there’s the vengeance of a tormented teen.

On the other hand, the tarantulas themselves don’t directly kill anyone like Willard’s rats do. One victim has a heart attack. One dies of fright (with no further explanation). And, in one of the funniest die-offs this side of Tucker & Dale Vs. Evil, four hapless dopes literally kill themselves trying to escape from a Volkswagen Bug (oh the irony). Only director Chris Munger probably wasn’t going for yuks. Pity.

I’m not saying Kiss Of The Tarantula doesn’t owe something to these movies. I’m suggesting there’s another movie worth mentioning in connection with it. 1972’s Frogs. Yeah, Frogs. I said what I said.

Think about it. “Languid rural 70s ambiance” coupled with basically harmless creatures that don’t actually do any killing. Hell even the rabbits in Night Of The Lepus kill people, albeit in a “someone in a furry costume throwing fake blood on someone” kind of way. Nope, Frogs it is.

Finally, we come full circle to that “dig two graves” idea. Maybe revenge is a dish best served cold, but there’s something satisfying about acting on impulse (many among us have made that sudden 3AM run to Taco Bell).

But back to digging two graves. The dispenser of vengeance often dies–Carrie, Maximus, Willard, Sweeney Todd, and so on. Susan, it gives away surprisingly little to reveal, totally gets away with everything.

And that’s what I love most about Kiss Of The Tarantula. That, and what happens to Uncle Pervy. I won’t spoil the joy for you, but I’ll give you a hint–one grave really is plenty.