I was going to start by saying I truly do loathe most vampire stuff. That would be ill-advised, not to mention inaccurate. I mean, just look at the name of this blog. No, what I can’t stand is pretty much every iteration of Dracula.

Stoker’s novel, Browning’s movie, Coppola’s movie, Hammer films (despite their glorious Christopher Lee-ness), Frank Langella, Blacula. You can have ’em. All of ’em.

On the other hand, I’m a big fan of any original and compelling spin on the Nosferatic, something that happens surprisingly often.

Michael Morbius will forever be my favorite. Lestat runs an extremely close second. Mr. King did a fine job with ‘Salem’s Lot. I love every single bloodsucker Jean Rollin put on the screen. Fright Night was fun. So was Lost Boys. And From Dusk Til Dawn. And Nosferatu, Shadow Of The Vampire, Vampire Hunter D, The Hunger, dozens more.

Ranking high is Near Dark, the pre-Twilight (ugh) love story of a young cowboy who gets bitten by a pretty vampire girl, turns into a vampire, and has to choose between his family and hers.

This movie is black ice slick. Unlike The Lost Boys that same year and Fright Night in 1985, you don’t hear the word “vampire.” Nobody gets staked. There’s no holy water, coffins, reflectionless mirrors, or garlic, and the only crucifixes to be found are on the handles of the vampire leader’s pistols.

There’s a hotel room shoot out that Rob Zombie must have had in mind doing The Devil’s Rejects. Same goes for some of Tarantino’s From Dusk Till Dawn barroom sequences.

Put that checkbook away. There’s more.

After nearly thirty-five years, Near Dark holds up extremely well visually too. The vampire clan routinely steals beat up old junkers. The costume design is leather, long coats, cut off shirts, and cowboy boots. I can’t say how far ahead Bigelow was thinking, but precious little in this movie ties its look directly to the 80s (as opposed to, say, Night Of The Demons one year later).

How about a less traveled path? Let’s talk about family, specifically the sacred myth of the traditional nuclear family. Lance Henriksen is Jesse Hooker. Jesse’s been a vampire since the Civil War. His “wife” is Diamondback (Jenette Goldstein). They have two “sons,” Severn (beautifully vicious Bill Paxton) and Homer (Joshua Miller). Sort of an undead Leave It To Beaver except for Jenny Wright who plays Mae.

Yes. Mae meets (and bites) Caleb (Adrian Pasdar). Incidentally, my favorite scene. She’s eating an ice cream cone. He asks, “Can I have a bite?” She says, “Bite?”

I’m a sucker (heh) for that kinda thing. Once Caleb is turned, Mae becomes unsure where her loyalties lie, her heart now half with the family, half with Caleb.

So yeah, the two “sons” are loyal. Mae is half loyal. How’s that for math?

No matter how many times we stake it or expose it to the harshness of daylight, this soul sucking idea of the “traditional” family keeps coming back in one retelling, remake, or sequel after another.

In the process, Bigelow skewers a few other family traditions. The bloodsucking Brady Bunch shows up in an RV, sort of a vamp-ily vacation. The barroom scene is a gory Norman Rockwell family dinner complete with a body on the table. Jesse becomes a corrupt caricature of the protective father when Mae turns Caleb.

When Near Dark was first released, New York Times critic Caryn James lamented how “Kathryn Bigelow… searches desperately for a style.” I disagree. I mean come on. The end for our undead Ozzie and Harriett arrives where? Behind the wheel of a station wagon. 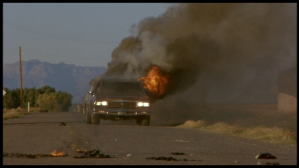