Today we depart a bit from the more bona fide kinds of horror. But many is the moment that is far more chilling and disturbing than any jumpscare, and such a moment often comes from a place that is not directly horror related.

You know what I’m talking about. The flying monkeys from Wizard Of Oz. The boat ride from Willy Wonka And The Chocolate Factory (Wilder, not Depp). The endless stream of darkness for the sadistic bastards over at Disney. These things left deep psychological scars on a number of us.

Here then is a handful of others you might have forgotten or missed.

I teach this play in my Introduction To Literature class, and I show this version, or at least part of it, to give folks a sense of how the Greeks might have done it. But the masks. Unsettling. Many of my students think so as well. Also, according to IMDB, one of the members of the chorus was William Shatner. Short of contacting Shatner himself, I have no way to verify or specify this.

On one hand, this is the first time I saw Benny Hill. On the other hand, two words. Child Catcher. He captures children because the Baroness Bomburst (nice name) abhors them so much that she and her husband, the Baron of Vulgaria, have outlawed them. The Child Catcher, played by ballet dancer Robert Helpmann, is about as all-around ickified as you can get. And that’s without any of the really sick overtones you won’t be able to avoid.

I love this play, and I’ve seen a number of film versions of it. Olivier’s is still my favorite although, admittedly, anyone seeing it for the first time now is gonna have a hell of a time getting past the fact that Olivier’s Richard III looks like Lord Farquaad.Clearly this wasn’t an accident, and it’s weird enough in its own right. But that’s not what I’m talking about. No, there’s another scene where the two princes arrive, twelve-year-old Edward V and his brother, the nine-year-old  Duke of York. Richard is to serve as their Lord Protector. Bad plan. There ensues a verbal sparring match between Richard and his nephews, ending with this reference to Richard’s hunchback from the young Duke of York:
“Uncle, my brother mocks both you and me;
Because that I am little, like an ape,
He thinks that you should bear me on your shoulders.”Olivier turns with a look of such utter venom that the prince staggers back. Even if you’ve never read the play or know nothing about the fate of the two princes, you know immediately these tykes are dead meat. It’s worth pointing out that Sir James Tyrell, the man who takes care of this for Richard, is none other than Patrick Troughton. “No! Not the second Doctor!” ‘Fraid so. 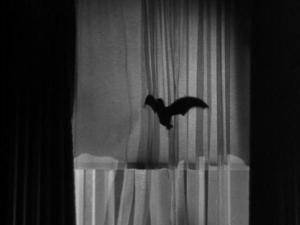 Well before such addiction nightmares as Requiem For A Dream or Trainspotting and well before he showed up in such science fiction/horror classics X: The Man With The X-ray Eyes and uh, Frogs (I couldn’t help myself), Ray Milland gave us a snapshot from the life of hardcore alcoholic, Don Birnam. During a bender of several days, he escapes from an alcoholic ward, steals a bottle of whiskey from a liquor store, and continues to drink in his apartment. Then the hallucinations start. Don notices a small hole in the wall. The hole becomes larger, and soon a mouse sticks its head out. Suddenly a bat flies in and devours the mouse as blood runs down the wall. This sends Don into an unhinged screaming fit and is pretty damn unsettling for viewers as well.

Joel Grey is, of course, sinister enough to deserve an entry all his own, but I’m talking about an altogether different level of sinister. Brian (Michael York) and Max (Helmut Griem) are at a beer garden when a young voice starts belting out “Tomorrow Belongs To Me.” Cut to the singer. A young man. Blonde. Suspiciously, stereotypically blonde. The camera pedestals down, and our suspicions are confirmed. The further the song progresses, the more and more people join in, and the more forbidding its tone and their expressions become. The older people in the crowd look uneasy, and by the end, almost everyone else is singing. The Nazi youth dons his cap and stands in full salute as those joining him in song look increasingly hostile and vicious. Like a trump rally.