One of the things we like to do from time to time here at Castle Blogferatu is round up a few short films for an evening’s perusal. Truth is though, I have a problem with short films. Not the films themselves. I love them, and really should do a better job reviewing them on here far more often. No no, my problem is logistics. The ones that make it to the big screen do so more often than not through the festival circuit.

Great for them. Sucks for me.

See, I’m not near any reasonably accessible festivals. The distance and/or costs become prohibitive. Sure, I could reasonably get to New York, but then I need a place to stay. That might not be too much of an issue as my standards on that front can drop spectacularly. On the other hand, well, a guy’s gotta eat too.

All of this is just a roundabout way of saying the combination of time and money don’t work in my favor. I seem to have one or the other, never both.

Again, sucks for me because there’s something both intense and poetic about short films. Flash or microfiction can pull this off nicely too, as can minimalism (like Raymond Carver’s “Popular Mechanics”). Not that features can’t be intense and poetic. But telling a story in a short amount of time is like a well executed sonnet or haiku, maximum impact in minimal space. That said, here are a few I’ve found over the years (and enjoyed every precious minute). 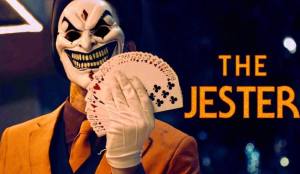 I love “weird shit that happens during Halloween” stories. Halloween, obviously, but also Trick R Treat, or my all-time favorite episode of Tales From The Crypt, “Only Skin Deep.” The Jester is divided into three separate shorts, the first starts when a nondescript, unnamed retail employee is stopped on the street by a tall, thin man wearing a top hat, orange suit, and a Joker-looking jester mask (complete with Mr. Sardonicus rictus grin). Each chapter is imminently watchable. In fact, I liked them so much, I watched the whole series three times in a row, then a couple more in the process of writing it up. It’s nearly impossible to take your eyes off The Jester himself, who starts by showing the aforementioned young man a card trick. The card trick takes a decidedly dark turn, and things escalate from there. It’s not clear why The Jester singles this guy out. There’s a possible implication that it’s because he’s not in a costume and is therefore lacking in appropriate Halloween spirit.
Favorite Moment: Cane trip 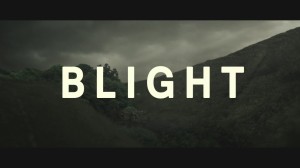 I came across Christopher Goodman and Kate Walshe’s very cool looking short thanks to the lads over at Lovecraft Ezine. It’s said to be based on Lovecraft’s “Colour Out Of Space” which is technically true though more accurately it’s based, and a little loosely at that, on one particular part of Lovecraft’s story. But taken as a standalone short, it works well. There’s an immediate sense of dread that sustains and increases surprisingly sharply for the film’s supershort run time (4:41 without the credits). This is no doubt aided by a little misdirection. Inappropriately located and/or oddly behaving plant life is great for creating such tension (just watch The Ruins). The special effects are very nicely done as well. Surprising given, again, the film’s length. Not so surprising when you discover Walshe is part owner of Millenium FX.
Favorite Moment: Very end

If you want a traditional story arc, you won’t find it here. The visuals are black and white, simple, and minimal, but the narrative is poetically dark. On one hand, nothing actually happens. On the other hand, there is still an eeriness and a significant sense of dread. There is no “meet the monster scene,” but the interior monologue combined with the constantly troubled look of actress Claudia Rivarelli is more than unsettling enough. There’s a hint during the credits that maybe she has been apprehended by “them,” whatever “they” are, but it’s never completely clear if the Rivarelli’s narrator is unstable, possessed, or being haunted. I have to wonder, therefore, how much Bolprand was influenced by “The Yellow Wallpaper.”
Favorite Moment: Hallway crawl

The longest and hands down my favorite of the shorts I rounded up for this post. Samantha (Eleonore Dendy) has just moved into her new apartment where she is immediately confronted by her immediately icky landlord (Charles Hubbell) for forgetting to sign the No Pets clause on her lease. Dendy is adorable, independent, and immediately likeable. How can you not side with a young woman who grabs a hammer and goes to investigate a strange noise? Meow is endlessly clever. Jopp makes references to so many 80s stand-bys: the Woman Alone, her mildly pushy Worried Mother, the Creepy Landlord, even a (mini-spoiler, sorry) Dead Pizza Guy (for my money, a nod to The Slumber Party Massacre). The title has a Stranger Things look to it which I assume is no accident since the cat (also adorable) looks quite a bit like General in Cat’s Eye. And why not? Meow is currently available on Filmshortage.com. Also it turns out Meow (Nala) is one good natured little feline.
Favorite Moment: Samantha eating from the bloodied pizza box (maybe it’s just me, but I had quite an audible giggle at that).

And that’s it for now. If there are any shorts you think I should be aware of, let me know in the Comments, and who knows? Maybe, just maybe, they’ll show up here, right before your naked, steaming eyes.