No, no, no, not movies to which one might bring a Slurpee. Slurpie Movies.

What’s a Slurpie Movie? I’ll tell you. It’s any movie where a slug, worm, mollusk, or some kind of slug/worm/mollusklike creature, often alien, often parasitic, infects a human body and proceeds to wreak havoc as only parasitic/possibly alien slug/worm/mollusks can. 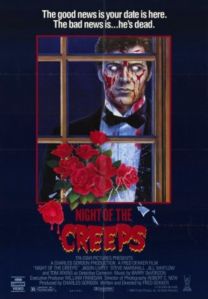 The first Slurpie Movie I’d ever seen was Night Of The Creeps in 1986. It involved a big ol’ heapin’ heppin’ of the aforementioned sluglike alien parasites that, in this case, rendered their hosts zombie-like and homicidal.

A bunch of us went to see this, including a friend of mine, a guy we called Fish. His actual name wasn’t Fish. His last name was Herring. So, Fish. Not integral to this story. Just wanted to mention I had a friend we called Fish.

I wasn’t sure how many movies with little slurpie thingies she would have seen before that. I hadn’t. The only ones I could even think of were Shivers and the cleverly titled Parasite. Nonetheless, the term Slurpie Movie was spawned. 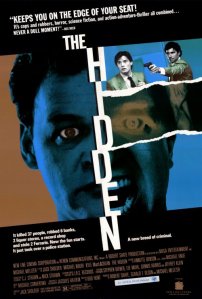 Then take yourself far too seriously, add Ed O’Ross and Michael “don’t remember anything I was in do ya” Nouri. Stir. Simmer long enough to cook off any remaining sense of humor. Don’t get me wrong. Still an enjoyable flick. Thoroughly.

It also sets up any number of things that will be referenced later by Men In Black: thing masquerading in Chris Mulkey/William Boyett/Claudia Christian/Clarence Felder/Ed O’Ross/John McCann/Vincent D’Onofrio’s skin, the sociopathic nature of the alien antagonist, even the remarkable similarity of Kyle MacLachlan’s and Will Smith’s mini-weapons.

But then, that title. I’ve seen (and, sadly, collected) an impressive number of Slurpie Movies over the years. Great does-exactly-what-it-says-on-the-tin titles like Slugs, Squirm, Slither.

Gotta wonder about the brainstorming session that yielded something as catchy as The Hidden. “Squidlike alien bug thing that infests people and turns them into sex-crazed homicidal maniacs. But what to call it? Slink? Writhe? Wait! Suction! Cuz it’s, y’know, kinda squiddy. Hell, how about Deathsquid or Sex Slug?” No. The Hidden. That was their final draft. Oh well.

But getting back to Night Of The Creeps–undoubtedly still my favorite Slurpie Movie. Mainly it comes down to the final scene. Our hero, Detective Cameron (Tom Atkins–gets offed not far into Lethal Weapon), squares off against a motherlode of the alien slugs which suddenly fly at him. Until then, nobody knew they could do that. Shrewdly, he duct taped his mouth then blew them all, and himself, up. Like ya do.

There are two endings. I won’t spoil the original but will say that it’s standard, unsurprising, Saturday-afternoon-B-movie, option-for-a-sequel stuff. However, in the alternate ending, we cut to Cameron, burned beyond recognition, smoldering, and making his way down the street. Incidentally a police car whizzes by this smoking mound of human wreckage without so much as slowing down. Huh. Cameron falls over, charred and dead. Several Slurpies burst out of his head and make for the cemetery.

Then it hits you. Yep–more than one orifice a resourceful Slurpie can access.

Jump ahead twenty years to Slither which I do love and consider a fine Slurpie Movie example. I’d call it an oh-so-close second to Night Of The Creeps. The gore, mutation, and sheer gross-out factors get amped way the hell up, well worth the price of admission. But let’s give credit where it’s due. First, it retreads the whole alien slug premise. Second, the utilization of various, uh, “entryways” into the host. Finally, the sluglike alien parasites get blown up. Again.

There is, woefully, no new ground broken here, all being Slurpie Tropes (who knew that was thing?) well-established by Night Of The Creeps. And that’s why it’s still my favorite.