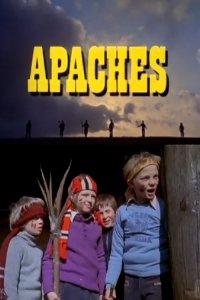 Some time ago, I was on Letterboxd checking out some lists of Folk Horror, and Apaches popped up a number of times. This made me curious, so I tracked it down, and wowzers was I ever woefully unprepared for what was about to befall my sweet, winsome soul. Lemme make it clear that I love safety films and have a pretty decent catalog of them, so I thought I was ready.

This was an unwise assumption, and originally I planned to review Apaches as another example of horror in movies that aren’t horror. On the surface after all, this seems like just another public safety film. But in the hands of those zany Brits at Graphic Films and The Central Office Of Information For The Health And Safety Executive, it became oh so much more. If I were to make a Top 10 list of my favorite horror shorts, this would be in the top 3.

The plot is uncomplicated. Over an unspecified period of time, six kids repeatedly go out to play at a nearby farm in the English countryside (hence the folk horror tie-in). One by one, most of them meet gruesome, tragic ends, the survivors blithely returning to the farm only days later to continue in their make-believe.

We meet these youngins right at the start: Danny (the narrator), Kim, Michael, Robert, Sharon, and Tom (spoilers ahead). Disaster strikes almost immediately and claims Kim as its first victim. The gang runs after a tractor that’s pulling a trailer and pretend it’s a train. Kim jumps on the trailer, but the tractor makes a sudden turn, and she falls under one of the wheels. The next scene shows a teacher taking Kim’s name tag off a coat rack.

Later, while playing Kick The Can (more like Kick The Bucket as time goes on), Tom tries to climb along the fence surrounding a slurry pit (look it up, fellow colonists). He slips, falls in, and drowns. Cut to a teacher cleaning out his desk.

Okay, sidebar: why are these kids ever allowed to go back to this farm? One would think the parents would descend on this place like the villagers at the end of Frankenstein. And where’s the parental supervision? It’s like a Charlie Brown cartoon from hell.

The worst fate of the lot befalls Sharon. While playing cowboys and Indians, the youths come to an equipment shed where they find an unlabeled bottle full of some unidentified liquid. I have no idea what’s in that bottle. One of the kids thinks it might be rat poison. I’ve seen reviews saying it’s weed killer, specifically paraquat. Who the hell knows? I looked up paraquat poisoning, y’know, just for laughs, like ya do. Sheesh.

Anyway, they decide to mime having a celebratory drink for having captured the farm/fort. Sharon “forgets” they’re pretending and drinks some by accident but immediately spits it out, getting some on Robert’s jacket. Moments later, as Susan enters her home, we see that she doesn’t feel well.

As the boys head home, Robert says, “That stuff made a right mess on my clothes. My mum’s gonna kill me!” At least, I think that’s what he says. That night, Sharon wakes up crying for her mother. Her shrieks of pain are the most unnerving part of the film. Next Sharon’s dresser is being emptied.

And then there were three. Time for cops & robbers. Robert and Michael take cover while shooting at Danny (with toy guns that actually look like guns–ah, 1977). Robert hides near a hay bale. Michael crouches behind a precariously balanced steel grille. It falls over when Michael darts out after Danny, landing on and crushing Robert in the process.

Michael, initially described as “daft,” is the only one who somehow manages to survive Killshire Farms. There’s a final twist I won’t give away, but I will mention that the closing credits include a list of 21 children who died in farm accidents the year before the film was made.

It also occurred to me, cuz my brain works in unsettling ways, that there’s another narrative lens through which to see this bloodless but surprisingly unnerving little film. In “Indexical Violence, Transmodal Horror,” Jason Middleton describes Texas Chainsaw Massacre showing in part how “dispossessed workers…enact revenge by turning the tools of their former trade upon their middle-class exploiters.” Similarly, Apaches becomes an allegory of the oppression of Indigenous Americans.

Okay maybe I’m reading too much into this. Either way, ain’t exactly All Creatures Great And Small is it?

SKULLS
13
BODIES
4 onscreen
1 offscreen
Available on BFI.org in the UK and on YouTube