So yesterday I was minding my own business when something came across my Facebooks that shook me to the very core of my sweet, winsome interior. What that was I will save for last. Cuz damn. But it gave me the idea for this post. I’ve already done a couple of posts about horror scenes in movies that aren’t horror, and this struck me as just another lovely blossom on the same branch. So, if you need to top off your tank of nightmare fuel, here is Some Stuff That Isn’t Horror…But It Is. 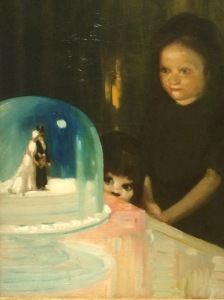 This is on the second floor of the Chrysler Museum in Norfolk, Virginia. I’ve already established the creepy children factor in the 13 Rules Of Horror. That’s not all that’s unnerving here. First, given my particular sensibilities, it’s impossible to for me to avoid wondering, “What if the people on top of the cake are real?” Y’know, some bizarro Twilight Zone or Black Mirror thing. That in turn makes the looks on the kids’ faces even more chilling. Second, the taller one looks just a little too uncomfortably like Chucky.

Have you seen Coyote Peterson? That guy (and you know it’s a guy–no woman is this stupid) who travels around and lets shit bite him? Well I watched him as he let himself get bit by one of these god awful critters. He described the pain as “so much worse than a bullet ant sting,” and it became so intense that he had to stop recording. The footage is deeply unnerving and not just cuz he was curled up in a ball screaming in pain. This thing didn’t just go “chomp” and call it a day. Oh no. It jammed those fangs in there good and proper, then squirmed around for some good ol’ downhome flesh rippins. Jesús marimba!

This one may not look like much in comparison to The Centipede From Satan’s Ass, but don’t let the little bit you can see in the picture fool you (for the brave and foolhardy, click here). Not clear why this was named after the infamous John And Lorena case other than the fact that those chompers look like they could sever a finger like a pair of bolt cutters, nevermind some innocent lad’s fleshy netherbits. If you’re still thinking, “Eh. Doesn’t look so bad,” it’s cuz I ain’t telled ya the best part–the longest one of these on record is 9 feet. That 108 inches of shrieking death magic that makes a Mongolian Death Worm look like a leftover bratwurst. Oh, and this thing doesn’t even have a brain! Trust me. You will remember this next time something brushes against you in the water.

This thing is scary as hell for any number of reasons. Again, children, that’s the first thing, Rule Of Horror #3. Second, 1500 BCE. That makes this is the kind of artifact people find in Lovecraft stories then start having relentless nightmares then go stark raving mad. Third, this, uh, creature is supposed to be an infant. Don’t just take my word for it. I pulled that lil tidbit of intel right off Ye Olde Officiale Museum Placard. Infant. That’s what it says. Look at the choppers on this little sucker! And finally, Trilogy Of Terror. Tell me this thing doesn’t get out of its case and run around the museum at night. 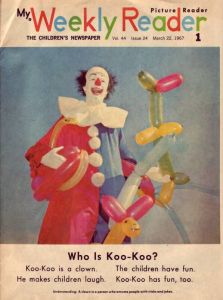 So I’m on this Facebook group called Vintage Weird (and boy do I wholeheartedly recommend). That’s where I found this little slice of heaven and became immediately terrified inspired to create this here missive. But what really tosses in the flesh-eating scarabs and then nails the coffin lid shut (you remember The Mummy, yeah?) is the accompanying text. The clown is bad enough, and my own Rule Of Horror #13 is, of course, Fuck Clowns. But “Koo-Koo has fun, too?” That’s just the disturbing little cherry on this homicidal sundae.

So there ya go. Bad dreams, children. I’ll likely be up late if you need a shoulder to sob on uncontrollably.