Well it’s a celebration of sorts here at Castle Blogferatu. Currently a thunderstorm rages outside. Nice to know that once again the skies weep for the day of my emergence. There’s a tattered banner drooping in the main hall, some poorly inflated black balloons, a homicidal clown, and even though it’s probably a lie, the castle’s deadly computer JanOS assures me there will be cake.

As a wee prezzie to myself, therefore, here’s a little life-celebrating list of 5 Of My Favorite Horror Movie Deaths. I’m surprised it’s taken me so long to get to a list like this one. I mean really. This entire blog could be just about my favorite horror movie deaths. I guess one might call that, uh, overkill. Yeah, I know. It’s a yuk tsunami up in here.

Andrew is, it turns out, the son of Lucifer and begins really coming into his demonic power whilst in high school. Sounds like a fun idea. Wow does it not go anywhere. Convoluted story, massive plot holes, two-dimensional heroine, fizzled out ending. Great soundtrack though. How often do The Cramps make it into a movie? But then–gym class. For being 54 seconds late, Andrew has to do push-ups while the class plays dodgeball. He seethes at this and, possibly by accident (it’s not quite clear), causes a ball to smash one of his peers into a wall and kill him. Easily the best scene in the movie, and possibly the only good scene.

#4 Roaches (“They’re Creeping Up On You,” Creepshow) 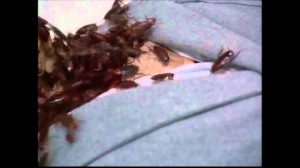 Few things make me physically squirm. A big ol’ heapin’ heppin’ of bugs will usually manage to do it. Not all bugs–ants, tarantulas, bees, wasps, scorpions, locusts, cicadas, praying mantisessesses, etc. Those are all fine. And before anyone comes at me, I know the difference between insects and arachnids. But centipedes (especially 6 inches or more), spindly-legged spiders, earwigs, roaches, no thank you. Especially *shudder* roaches. So yeah, even knowing how they did it, the final scene with all those creepy crawlies spewing out of E.G. Marshall… 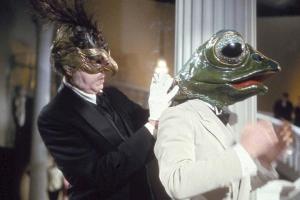 There are so many outlandish, over the top deaths in both Dr. Phibes movies that I could do a list just for them, so it’s difficult to pick just one. But if I have to narrow it down, I’ve gotta go with the frog mask. Elegant yet zen-like in its simplicity. Phibes puts the mask on one of his enemies during a costume ball. Its clasp is undoable and slowly constricts one notch at a time as the victim wanders around the party until he, y’know, croaks. 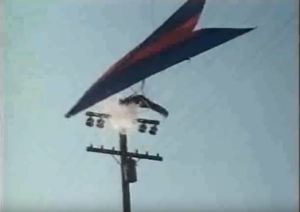 I can scarce overstate how the gleeful homicidal abandon of this movie makes it one of my all time favorites. Roger Ebert even liked it! What’s great about this particular execution is its total improbability. After a handful of high school thugs semi-accidentally crush his leg, David seeks revenge by orchestrating a series of unfortunate accidents of his own. One includes sabotaging a dude’s hang glider. But put that check book away; there’s more! It’s not enough that the sabotage should cause the lad to crash to his death. Oh no. Somehow this manages to happen at just the right moment to hit some power lines. There was just so much that had to line up just right for this.

I will mention this scene every chance I get. I can’t help it. This movie is so underrated, and this particular scene, *chef’s kiss* mwah. Norman has been cleared of all suspicion for a recent string of deaths, so he really is, it seems, rehabilitated. In a circuitous little plot twist, his actual alive and well for really reals mother (not the dead woman he kept in Psycho) is now sitting in his kitchen. The last thing he says to her is “You sure you won’t have a sandwich.” It’s soft-spoken, almost deadpan, followed by the greatest whunk of impact ever. The first time I saw this was on VHS, and I rewound it to that spot at least a dozen times. Cracks me slap up. 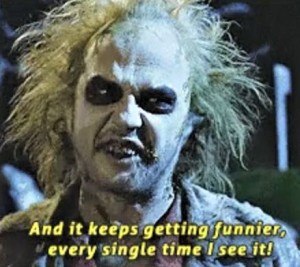