Those damaged, misguided souls who follow this blog semi-regularly (now don’t be shy–you both know who you are) know that I’ve discussed a number of horror moments that show up in movies that aren’t horror movies. I just thought it might be fun to flip the script this time and look at some funny, not-so-frightening moments from a few horror movies. For obvious reasons I’m not including horror comedies since those are already meant to be humorous. Instead I’m focusing on straight horror that has some comical stuff here and there. 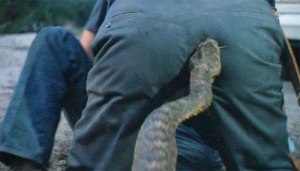 This is one weird flick. Tim Ochopee lives in the everglades. He’s more comfortable around snakes than people (kinda like Willard, but with reptiles instead of rodents). Whenever Tim is in trouble, his pet rattlesnake Stanley helps him out. In this case, yep, he bites a bad guy in the ass. It’s hilarious. What can I say? Apparently I’m 12. 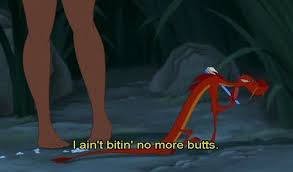 When Julian sees Michael Myers, he runs out to tell babysitter Ashley. Dave is there with him, and when Ashley agrees to come check out Julian’s room, Julian says “Send Dave first!” Well, yeah, duh.

Death Bed: The Bed That Eats 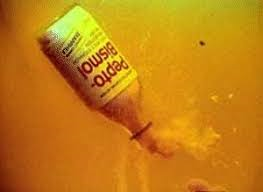 Chalk up a win in the product placement column. One of the bed’s potential victims has unexpected ill effects on the demon sleep system. This prevents the bed from eating her. At one point, she leaves, and the bed drinks a bottle of Pepto Bismol. It’s possibly the cheapest sight gag I’ve ever seen, but it still made me laugh.

Here’s a two-fer. First there’s Pacino when he sticks his finger in the holy water while looking at the religious images in the church. The unrestrained glee on his face brings joy to my faithless little contrarian heart. The second is in the subway when he defuses an assault by telling his aggressor (who was in fact instigated by Pacino in the first place) about Carlos, who is going to fuck this guy’s wife “up the ass…on your special green bedspread.” He then informs the man there’s still time to catch them. All of which is done in Spanish. It’s “invigorating.” Maybe just my overdeveloped sense of vengeance.

Ashley flips off Luke. If you haven’t seen this, check it out. I won’t say anything else. 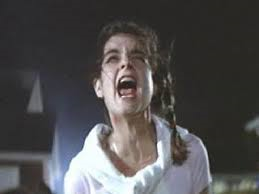 What’s happening? You’ve got an enormous hickey, that’s what. When I see this now, I want Olympia Dukakis to come out and say, “You got a lovebite on yer neck he’s comin’ back this morning what’s the matta with you? Your life’s goin’ down the toilet! Cover up that damn thing!”

I thought Alice Krige was so sexy in Ghost Story, so I couldn’t wait to see her in Sleepwalkers. I don’t think it’s as bad as alotta people say, but the whole murder by maize, that’s just kinda, well, corny.

I Drink Your Blood

You need physical media for this one because you have to go to the deleted scenes in the special features. When grandpa goes to avenge his granddaughter, the evil cult gets the better of him, doses him with acid, then (somewhat inexplicably) sends him home. What was cut (and shouldn’t have been) was grandpa on an acid trip, hallucinating while sitting at the kitchen table.

Night Of The Lepus 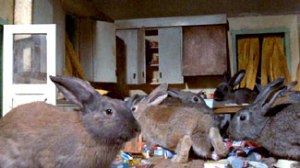 What’s not to love about this movie? Where else are you gonna find Janet Leigh and DeForest Kelly in the same damn movie? Monty Python And The Holy Grail notwithstanding, they’re bunnies. Running amok. In what I guess must be a dollhouse. Also, Night Of The Lepus was 1972, Holy Grail 1975. I have to wonder if the Pythoners were familiar.

The funniest moment in the movie comes when the cook and the hitch hiker come to the house where Leatherface has been pursuing Sally. In the process, he has destroyed the front door with his chainsaw. In a moment of unbridled domestic outrage, the cook sees it and yells, “Look what your brother did to the door!”