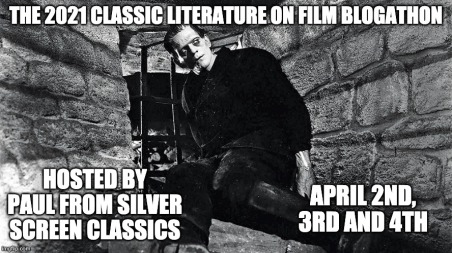 This post is part of the 2021 Classic Literature On Film Blogathon hosted by Silver Screen Classics.

Ah, the classics. I was awfully keen but also a bit apprehensive about participating in this blogathon. I wasn’t sure what the definition of Classic Literature would include and was sore afraid that it only meant stuff from before, say, WWI. And as much as I love Frankenstein, Dracula, Jekyll & Hyde, The Phantom Of The Opera, and so on, I was concerned that there might be huge influx of entries for them.

Happily, when I asked Mr. Paul if Carrie counted as a classic, he graciously said yes. I mean, it was published almost 50 years ago after infamously being saved from the trash by Tabitha King. So, I sat down for a comparative analysis of the relative merits of Carrie. All. Three. Versions. Honestly, the things I do for you people. And here we go–once, twice, three times a lady. 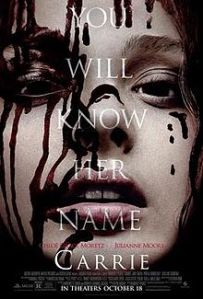 Sources suggest that Stephen King was lukewarm about a Carrie remake. Supposedly he also thought Lindsay Lohan would have been a good Carrie. That said, director Kimberly Peirce’s Boys Don’t Cry proved to be a fine the vehicle for Hilary Swank’s Best Actress Oscar (now there’s someone I’d love to have seen as Carrie at some point). Sadly, I wanted to like this way more than I did. I mean, I liked it just fine, but it’s the least effective of the three. For one thing, it doesn’t break any significantly new ground. That said, earlier iterations of Carrie White were substantially different in handling or not handling her psychic ability. In this case, Chloë Grace Moretz’s Carrie is in total control. We can see it in her facial expressions and hand gestures during her version of Carrie’s rampage. This time Carrie has reached the breaking point, and her face says, “Now it’s my turn, you fuckers!” I like the levitating, and the face through the windshield shot is a nice touch too. Sigh…how I do love a big ol’ heapin’ heppin’ of bloody revenge. 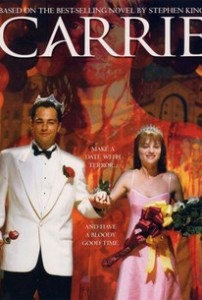 This time the title role goes to Angela Bettis (yes, Lucky McKee’s May and Sick Girl Angela Bettis). She’s fascinating to watch. The pre-prom Carrie is like a skittish bird you’re trying to get to trust you: darting head movements, trembly, and easy to shoo away. For a made-for-TV flick, this version is surprisingly effective and remains, for the most part, a bit more faithful to the source material. Carrie destroys much more of the town this time, as she does in the novel. One major departure is the ending, written apparently for the possibility of Carrie becoming a TV series (which never happened but I so would have watched it). Personally, I kinda like the idea of Carrie getting away with it. Another major difference is her relationship to her power. Spacek’s Carrie seems terrified and barely (though somewhat) in control. Bettis’s Carrie is overcome and doesn’t know what’s happened by the time she returns home, almost as if she’s awaking from a trance. Still, this just might be my favorite of the three. I’m curious to know how King felt about this version but I couldn’t come up with anything. 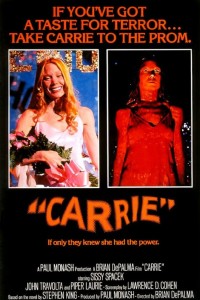 Whether you liked this first adaptation or not, for many of us Sissy Spacek’s portrayal of Carrie White will always be the definitive one. Who can forget that wide-eyed telekinetic rampage? Or Piper Laurie as a literal holy terror? Or pre-Greatest American Hero William Katt and pre-Halloween P.J. Soles? Or Nancy Allen and John Travolta roasted in a muscle car? Or an electrocuted Sydney Lassick? And yes, he does look familiar. He was Cheswick in One Flew Over The Cuckoo’s Nest. Turns out he gets the ol’ shock treatment. Again. Surely De Palma did that on purpose, right? Come on, what are the odds? Hell, even Edie McClurg gets flambéed at the prom. Stephen King even considered it “…a really good horror-suspense film, much better than the book.” I don’t know if I’d go quite that far, but it’s still good and well worth watching repeatedly.

And so, class, the moral of our little cautionary tale: don’t fuck with the shy, awkward, strange kids.