It’s that time again. Time to take the lantern from its rusty hook, unlock the heavy basement door, and descend the dank steps that lead to Castle Blogferatu’s movie vault. There we can peer into the oft neglected non-horror section and see if we can’t dig up some more non-horror horror fare. Let’s see…Death On The Highway? Not in the mood. Apaches? Did that one.

“Evil mind, evil sword.” That’s what Shimada Toranosuke (Toshiro Mifune) says of Ryunosuke Tsukue (Tatsuya Nakadai).  Throughout the film, Ryunosuke maintains a haunted, thousand-yard stare of quiet insanity. At the very end Ryunosuke is plagued by the shades of his many victims (much like what happens to Richard III before his finale). This culminates in a seven-minute sword fight that clearly had to inspire the hammer fight in Oldboy (the real one, not that god-awful remake) as well as a similar scene from Daredevil. But it’s Ryunosuke’s face combined and increasingly jerky movements in the final scene that make him appear like a puppet in someone else’s control. Eerie. Also note the headwear that will return in Big Trouble In Little China.

But come. It won’t do to tarry. 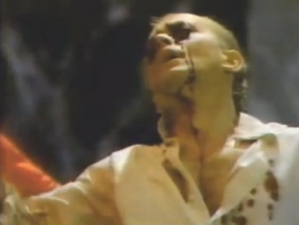 I cheated just a little on this one. I mean, as a play, Oedipus The King is already, in keeping with the parlance the times, pretty fuh-REAKY. There aren’t any truly gory versions of the scene where he blindifies hisself, at least not that I’ve found, but this one from 1986 borders closely enough on gruesome. I know. I’m cheating a bit asking you to use your imagination for this. But if you just consider the manner in which Oedipus does this–by taking the brooches from Jocasta’s dress and stabbing his eyes with them repeatedly–well, that makes it much worse.

You might be thinking that the Frankenstein overtones alone are enough to count Blade Runner as a horror movie. I remain ever on the fence about this. I still regard it primarily as a noir-style thriller with a science fiction setting. You might also be thinking that I’m going to talk about the eye-gouging scene, but I’m not. For me, the creepiest scene in the film is the death of Pris (Daryl Hannah). The whole thing starts out in a room full of J.F. Sebastian’s (William Sanderson) dolls, and my 5th Rule Of Horror clearly states that “Dolls are evil. Always.” Pris’s attack of Deckard is violent enough, but once he manages to shoot her, the kicking, screaming, flopping around on the floor results are tough to watch. 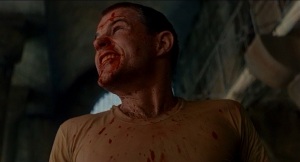 Really, any number of things from this movie could count as horror moments. The real-life horror is obvious, as is the hulking, sadistic Hamidou (Paul L. Smith). Psychologically, one might point to Billy Hayes’s (Brad Davis) line, “I know because I’m from the factory. I make the machines.” But for straight up, flat out, wince-worthy bloodletting, I have to go with Billy’s vengeance on the informant, Rifki (Paolo Bonacelli). Billy chases him through the prison and finally corners him, pinning him down for what at first looks like an extended kiss. That is, until Billy raises his head in triumph and spits out Rifki’s tongue.

If you please, indulge me just a bit longer.

In a previous post, I explained why I consider this a horror movie, but there are enough people who disagree with me that I felt it only right to list this scene here. Like Midnight Express, there are many scenes from which to choose: Billy’s suicide, Mac’s lobotomy, and Nurse Ratched’s ice cold need for ironfisted order all spring to mind. But it all goes truly sideways for me during a group session when Cheswick (Sydney Lassick) has a complete meltdown about his cigarettes. Mac breaks the glass at the nurse’s station and retrieves them. The orderlies swarm in to restrain Cheswick and fight with Mac who turns on them. Chief Bromden (Will Sampson) then gets involved to defend Mac. Result, and all three are sent for electroconvulsive therapy. Cheswick is first. His reaction, screaming to Mac for help (who is now powerless to do anything) is tragic and deeply disturbing.

There now, not so bad, is it? And now, this way to The Great Egress. After all, wouldn’t want to be left behind.