The fact that my kids are grown-ass adults makes me feel, understandably, kinda old. On the other hand, it also means that I don’t particularly have to like children anymore. So I don’t. Plus, as I’ve made clear in the 13 Rules Of Horror, children are creepy–always. I speak from experience as a father. Especially when they do non-childlike things and/or do childlike things out of context. In no way of course do I refer to my own kids. They were always rational, angelic, selfless, beatific little beings full of sweetness and light. But other people’s kids, wowzers. Let’s just say I’ve seen a few who’d be at home on this list.

I’m starting with this one because this thing freaks me out to this day. In truth, I was torn about listing it at all since this godawful critter falls closer to the monster end of the spectrum. Still, it’s somebody’s kid I guess.

I haven’t seen the 2018 adaptation, but I’m apparently one of the few who kinda dug this made-for-TV version and thought they did a decent job with IT and CENTRAL Central Intelligence. Little bit of backstory, the Advanced Technology Center on the campus where I teach is a pretty cold, imposing edifice that I frequently refer to as CENTRAL Central Intelligence. Anyway, the creepy children show up in the scene on Camazotz where they are all standing in their driveways bouncing balls. In unison. Expressionless. Yikes.

“Are you my mummy?” That’s pretty much all I have to say I think. 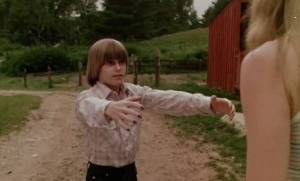 These kids are more George Romero zombie-lookin’ than the ones coming up at #6. And they have black fingernails. And they they burn you up when they touch you. And the movie has one of those awesome “ain’t over yet” endings I love so much.

I’ve written about this before because it is, after all, a christmas movie. I used to think this was a blatant ripoff of the original, but I think maybe it’s more along the lines of heavy influence. There are many differences. In this case, it’s some weird virus that causes all the problems as opposed to some chemical mist. Also these kids become largely affectless (with occasional outbursts of rage) and homicidal but otherwise function like normally living, breathing children which makes them that much spookier. 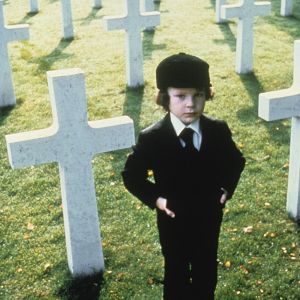 Of course Damien was gonna be on this list. Before anything demonic or supernatural happens, all ya gotta do to up the weirdness factor is put a kid in a suit. To me, a kid in a suit is part of that whole uncanny valley thing. Then add the Satan stuff and we’re off to the races. And that smile at the end. Sheesh.

I’m not sure which is more threatening, Malachai yelling “Outlander!” or everything Isaac says. To be fair, Isaac was played by an adult John Franklin, but really that just adds to the “kid out of context” vibe.

Poor Charlie. She’s awkward, weird and, well, possessed, sure, but she’s still essentially innocent (though that noise she habitually makes is unnerving). But the best part about her is the total misdirection she provides. From the second I saw the trailer for Hereditary, I focused entirely on the wrong thing, right up to that gobsmacking WTF moment. If you know, you know. If not, what rock have you been hiding under?

Before Jean Grey and Professor Xavier started up the psionics in The Uncanny X-Men, these kids were possibly the original creepy, suit-clad, telekinetic kids. They also have that white hair and those freakazoidonal eyes. And yet, somehow I find them significantly more sinister when their eyes aren’t glowing. I love this movie, and it’s quite a testament to director Wolf Rilla that the audience doesn’t feel at all bad about what happens to these tykes. Not for a second. At least, I don’t but, y’know.

Darling Rhoda Penmark, my favorite vicious little sociopath. Can’t you just see her showing up on an episode of Law & Order either completely taking in Benson and Stabler, or giving Bobby Goren a run for his money? What’s entertaining is not just how calculating and cold-blooded she is, but how in some ways she’s still a naive little girl. Both those sides are best captured during Rhoda’s conversation with the caretaker Leroy. When he tells her about how blood can’t be washed out, he successfully rattles Rhoda’s cage. Bad plan. There are two made-for-TV remakes as well: the god-awful 1985 version, and the Lifetime one with Rob Lowe from 2018 that I haven’t been able to bring myself to watch…yet.

So there it is, yet another list. I’ve been doing these with some frequency. Maybe at some point I’ll set a little time aside for a Lists Only theme. Thoughts? Suggestions? Hit them Comments.