So last night I watched Willy’s Wonderland. It was kinda silly and stupid and super fun to watch. I seriously considered reviewing it, but there’s a couple problems with that. One, I generally try not to review really recent stuff all that often. A more significant issue, however, is how my brain tends to “work.” Some people have a train of thought which implies following a fairly identifiable path to a fairly specific destination possibly with some connected stops along the way.

My brain is much more like a pinball machine. Lots of noise and flashy distractions through which the pinball moves pretty quickly, bumps into stuff, and careens off into a new direction. Like the player operating the flippers I can exercise a small bit of control over where the ball goes, and that’s it. Sometimes there’s a multiball bonus when all kinds of stuff goes flyin’ around at the same time. And sometimes the machine tilts. My point, and I do have one, is that this is exactly what happened as I scrawled out a few notes about Willy’s Wonderland.

So here we are, with a post about 5 Games That Should Be Horror Movies.

Yeah I guess maybe I’m cheating a little bit here since this one, according to IMDB is in pre-production. Supposedly filming is supposed to start this spring. But it still surprises me that it took this long. Country Bear Jamboree and The Hall Of Presidents are bad enough, but by far the most terrifying thing in the park is It’s A Small World.Animatronics are terrifying much the same way ventriloquist dummies are, so this is a no-brainer. It’d be way easy for this to be done stupidly, so at the very least I hope it’s vicious and gore-soaked.

If for not other reason, I’d like to see this one on the screen just for the voice of GladOS. Her generally flat affect and soft spoken tone is as disturbing as HAL in 2001: A Space Odyssey. Incidentally, there’s a YouTube channel, MxR Plays, hosted by Henry and Jeannie. Along with some very entertaining anime voices, Jeannie does a fuh-reaky GladOS imitation. Anyways, it’d also be fun to see some of Aperture Science backstory. 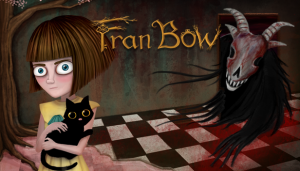 This is a weird, weird one. After her parents are murdered, Fran is locked up in Oswald Asylum where she tries to figure out how to A) escape and B) reunite with Mr. Midnight, her beloved cat. It’s a mystery and puzzle game, but damn. One of the things Fran can do, y’see, is take these pills that allow her to see the ghastly spirit world that also inhabits the institution. This provides her with clues and riddles to help her accomplish her ends. But holy crap are they nightmarish. This game deals with pain, loss, trauma, torture, and stays with you like a bad dream. It took me a while to get through it since I had to keep taking breaks for a couple days.

#2 I Have No Mouth And I Must Scream

The Harlan Ellison story is chilling enough, but playing it out as a game…damn. For the most part, it’s like a bleak, depressing Choose Your Own Adventure kind of story with options that include murder, genocide, rape, and other attractive behaviors. Most of the options lead to some kind of downbeat result. If you’ve seen the “Shut Up And Dance” and/or “Bandersnatch” episodes of Black Mirror, then you understand the kind of vibe this game throws at you. 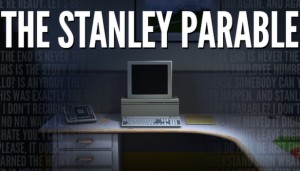 What started out as a Half-Life 2 mod became another strange little game in its own right. You are the only player–a guy named Stanley who is alone in an office building. Well, alone except for a narrator who becomes increasingly condescending and irritating. There is nothing to kill in the game, and very little to do. It’s just so odd. If you have played this and don’t get the horror, hear me out. I’ve played this and found it seriously unnerving. This game makes me paranoid, like I’m being watched, studied, and/or experimented on as if this is a secret government/military/industrial complex mind control project. I think there’s a great deal of tension to be ramped up by putting this on screen, along with a certain level of existential dread/Sartrean hell.