Right, so here’s what happened yesterday. I had to go pick up my kid from college which is only a couple hours away. I left at 10am, figuring on 2 hours to drive up, an hour to pack, an hour for lunch (kids…they wanna eat Every. Day!), 2 hours back, plus an hour for unforeseen circumstances. Figured I’d be back well before 630pm. Plenty of time to dash off a quick blog post.

This was an unreasonable assumption.

Let’s just say that was very optimistic on my part. But I had to post something, and it had to be fast because my brain was turning into oatmeal. And not the hearty Irish steel cut kind either. That’s when I realized it was in fact the 150th post of my little endeavor, so I thought, okay, let’s do something fun.

Well, instead of fun, I came up with what I posted last night. But hey, I tried. Thus far, though, nobody has come forth with the answer but I remain hopeful. On to Witchboard.

My movie palate being refined as it is, sometimes it only takes a couple words to sell me on a flick. Two of those words are “Tawny Kitaen.” Another two would be “Ouija board.” The combination of all four is nigh irresistible. So, gather ’round kiddies whilst I unfold a tale of headier times in the foul year of 1986.

I’d already been aware of Ms. Kitaen’s flowing locks and towering acting skills from 1984’s god awful Bachelor Party, so I was more than ready to plunk down some hard earned lucre to see Witchboard when it hit the theater. Add Stephen “Patch from Days Of Our Lives” Nichols and I even got my then girlfriend to come along. Let’s just say Witchboard’s disappointments did not and do not disappoint.

It all starts innocently enough as Ouija board possessions so often do. Linda (Kitaen) is persuaded to try a Ouija board by her ex, Brandon Sinclair (Nichols) which sounds like a name out of some really bad vampire fiction. 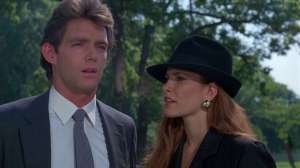 Understandably this is much to the chagrin and dismay of her current boyfriend Jim (Todd Allen, apparently the result of a cloning accident involving Rick Springfield and Huey Lewis). Well don’t y’know Brandon and Linda contact a spirit named David and well don’t y’know that good ol’ Brandon has communicated with David before. Of course. What could go wrong?

At this point, if you were to consult your own Ouija board to see if this review has any spoilers, your planchette would fly to “Yes” possibly of its own accord. So there’s that. David, it turns out, isn’t David. He’s the spirit of Carlos Malfeitor who’s now trying to possess poor, hapless Linda. Why such attachment to her? Well, Malfeitor (Portuguese for evil doer by the way p.s.) was an axe-murderer y’see. He was killed in his home by police in 1930–the very home that, gasp, Linda and Jim live in now! Ahh…ain’t nuthin’ better than a movie luggin’ out Ye Olde Clubbe Of Ironye in order to dole out a few konks on the viewer’s melon.

Lots of lighthearted injuries and lethal hijinks are sprinkled throughout Witchboard’s 98 longish minutes. Highlights include the weird way Jim opens a whiskey bottle, bad demon voice dubbing, the Ouija board being shot, and not one but two count ’em two defenestrations. It’s always a joyous day when I get to legitimately use that word in a post. Oh and Rose Marie shows up. For reals. She does.