So there I was, literally stretched out on the ol’ medieval rack. The local drinking establishment around the corner is having some remodeling done, and a truck pulls up on my street. Wait did I say truck? I meant jesus train because one moment I’m havin’ a bit of a snooze, the next, the christian outside my window proceeds to fill the air with the good news of the word. Loving irony as I do, I pull on some sweats and grumble “christ o-mighty now what.” 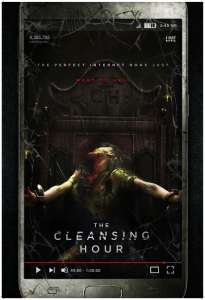 Don’t get me wrong. Believe what you believe. Good luck. I wish you well. But I don’t wanna join in even of my own volition, much less be forced to partake of salvation, and even less so at 730 in the morning. However, this did put me in mind of a specific movie, The Cleansing Hour. I first saw this as a short back in 2017. It had a really cool take on the exorcism idea and was a taut, effective, 19 minutes. I was very excited when I discovered it was gonna be a feature.

I didn’t get around to the full-length version until fairly recently, and it holds up fairly well. It’s got a decent pace, handles character development and backstory effectively. We follow Father Max and his livestream show, The Cleansing Hour, in which he exorcises some poor possessed individual every week.

Except Max isn’t a priest and it’s all a hoax that merely serves as a vehicle to generate views and followers so he can shill his “Vatican approved” merch–prayer cloths, holy water, shit like that. It’s a sweet setup. What could go wrong?

Well nuthin’ really, except maybe the outside chance of an actual possession. When the latest “exorcism” actor doesn’t show up, the guy who runs the actual production end of the show, Drew, manages to talk his long-suffering but supportive fiancée, Lane, to step in. It doesn’t take long at all for her to be taken over by a demon they discover to be Aamon, a Grand Marquis of Hell who is, among other things, a settler of disputes.

That’s interesting since Aamon forces Max to confess to a litany of transgressions whilst online (my own inner demons compel me to to warn you to abandon all hope of avoiding spoilers, ye who enter here). It seems the good “father” has a checkered past indeed, starting way back in catholic school when he accidentally killed an abusive nun who was literally beating the living hell out of Drew.

Aamon also forces Max to confess that he’s a fraud, and the show is a sham. But Aamon isn’t done. He finally corners Max into confessing that he had once slept with Lane. While all of this is going on, the viewer numbers skyrocket, and this is when Aamon reveals the final surprise. Aamon is not Aamon after all, but The Devil. Turns out what he wanted all along was access to Max and Drew’s feed.

The movie has one of those gleefully satisfying end-of-the-world endings we get in movies like Life, Night Of The Creeps, Slither, “The Lonesome Death Of Jordy Verrill,” The Ruins, and so on. The Devil, y’see, uses Max and Drew’s feed to possess the nearly 20 million amassed viewers causing them to attack whomever is at hand. Clever.

As the credits roll, we see the results of this mass possession. Murder epidemic, crazed white-eyed killers, etc. I dunno why, but over-the-top, potentially world-ending endings make me giggle. I’m sure it’s some deep rooted flaw in my character. Probably something Freudian.

I read an interview with Ryan Guzman (Father Max) on CBR.com where he said:

We rely too much on social sites to validate us. I think that’s the end all be all message of the whole movie. This thing that’s supposed to connect us all and make us feel better about each other and help each other out — we are not using it in that way.

I like it. Bloody Disgusting calls it a “snarky takedown of the digital age,” and I can agree with that. But I hasten to add that The Cleansing Hour goes beyond snark and works metaphorically as well. Not only do people put too much stock in and emphasis on social media, they can also become negatively affected and destructively influenced by it which itself is a kind of possession. Dang. Looks like I stumbled into Lecturey Professor territory for a minute. Time to pivot and jeté back to Coolsville.

P.S. Pause the viewer comments on Drew’s screen. Might be a few easter eggs (at least that’s what I consider them).