Here’s another list that I’m surprised took me so long to get to, and that’s my list of Top 10 Horror Crushes. There is just something about all these folks. Whether it’s physical appeal, attitude, voice, portrayal of a specific character, or any combination thereof, if they pop up onscreen or online or whatever, I will drop what I’m doing and look at the image, watch the video/movie/clip, read the article, whatever.

And I mean Vampira, not Maila Nurmi. I do I feel bad about the impoverished conditions she ended up in, and she certainly has a right to some bitterness and negativity. But I still find her egotistical, self-aggrandizing, and just generally unpleasant which is why she’s not higher on this list (although I really liked the documentary Vampira And Me). Anyway, I just love that macabre, Charles Addamsy edge. It’s a shame that there are only a few short clips left of her horror host days.

Especially in pretty much any the 60s Italian horror movies. If I had to pick specific favorites, they’d be Black Sunday (obviously before they hammer the spiked mask onto her face) and An Angel For Satan (pictured). 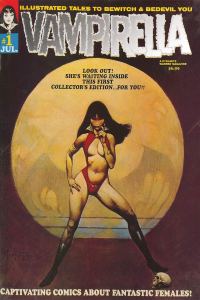 Winner of the Jessica Rabbit award for “I’m Not Bad I’m Just Drawn That Way” is this brainchild of comics artist Trina Robbins and writer/editor Forrest Ackerman. Is it weird to have a crush on a comic book character? I mean, clearly Vampirella was drawn with a specific, hormone-addled demographic in mind, but she’s also a serious ass-kicker which is even better. Sadly, a good movie version has yet to be made. 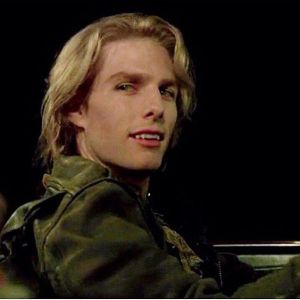 I loved how Tom Cruise handled Lestat in Interview With The Vampire. This is maybe a slightly unconventional interpretation of “crush,” but I think it qualifies. I do not have a crush on Tom Cruise whom I truly dislike. But y’see, the second I encountered Lestat in the first book, I wanted to be him. This got even worse after reading The Vampire Lestat. Everything Tom Cruise did as Lestat matched up perfectly with how I thought Lestat should look and behave. Jury remains out, however, on Stuart Townsend in Queen Of The Damned.

I heard or read somewhere that Sherrie Moon Zombie originally wanted to be a voice actress (and if you haven’t seen The Haunted World Of El Superbeasto, it’s worth checking out just for her). She’s also endlessly watchable. When she’s hitchhiking in House Of 1000 Corpses? She could say, “Hi I’m gonna lead you into the middle of nowhere just to torture and dismember you,” and I’d still tell her to get in.

Adorable back in Re-Animator, delightfully evil in Sun Choke, and stunning in Jakob’s Wife. She just seems to get better and better with age, and if you’re not following her Instagram, you are totally missing out. Her posts are super cute and always really upbeat and positive which, shockingly, I find kind of endearing despite my largely misanthropic tendencies.

I was smitten with the ageless Angela Bassett ever since Boyz N The Hood, but once she showed up in American Horror Story: Coven, it was all over. It’s not just because she’s gorgeous and alluring (which she is). It’s also the fact that Marie Laveau was fucking In. Charge. Come to think of it, she was pretty damn take-charge in the following season, Freakshow, as well. 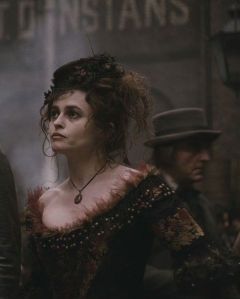 I’ve been watching Helena Bonham Carter for a long time. I loved her in Hamlet, and I even suffered through A Room With A View just because of her. What I love most is that she has zero fucks to give and is Just. So. Weird. I find that endlessly fascinating and would gladly watch and listen to this woman read a phone book. My standout roles are Marla Singer, Bellatrix Lestrange, and Mrs. Lovett.

I mean, come on. Plus she’s fucking hilarious–I loved the Valley Girl shtick she put on through the 80s. As a person, Cassandra Peterson is a marketing goddess and pretty classy as well. In the 80s Maila Nurmi came after her for trademark infringement (a case which was withdrawn later). Peterson apparently remained professional and never had a bad thing to say about Nurmi. In her Vampira And Me interview, on the other hand, Nurmi remained fairly petty and vicious about the whole thing.

Connie Britton in AHS: Murder House, Jessica Lange in any AHS, Sara Paulsen in AHS and Ratched, Lily Rabe in AHS: Coven, Eihi Shiina in Audition, Daphne in Scooby-Doo Where Are You? (okay that’s pretty weird) 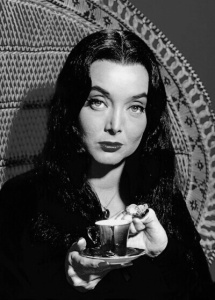 As much as I looooooove Elvira, this was absolutely no contest. Charles Addams was a genius, Morticia is one of the greatest characters ever created, and to me Carolyn Jones will always be the definitive portrayal. The constant back-and-forth between her cool, calm, and collected demeanor in the face of John Astin’s maniacal Gomez energy is eternally watchable. And let’s be honest. Without Morticia, neither Vampira nor Elvira would have ever become a thing.

And that’s my list. Who are y’all hard crushin’ on out there? Let me know in the Comments.