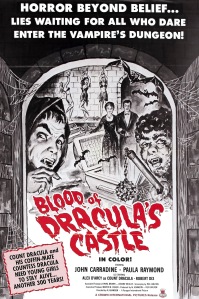 All hail Crown International! These folks were grindhouse gods for over 20 years and brought us such exploitation classics as Blood Mania, Point Of Terror, and Trip With The Teacher. But then there was also Blood Of Dracula’s Castle.

Wowzers. It ain’t often that a movie comes along that’s so bad even I can’t enjoy it. I mean, I can’t even watch this in a purely camp sense. To call it a trainwreck would be wildly misleading. Trainwreck implies a functioning mechanism that was derailed on its way to a set destination.

Blood Of Dracula’s Castle is more like taking a bunch of random parts from a railroad yard, piling them on a track, and trying to pass them off as an actual train. It’s got the parts of a train but none of the properties of a train.

There is so much that is so disastrously wrong with this movie that it’s nearly impossible to pick a starting point. So let’s start with the setting. The film was shot in northern Los Angeles county at a place called Shea’s Castle. Portions were also shot in, of all places, Coachella Valley.

In terms of the plot, the castle is set in Arizona, of course, where it is inhabited by Count and Countess Townsend. This is apparently an alias adopted by ol’ Drac meaning yeah they’re vampires.  Anyway, the Townsends, aren’t exactly the kinds of vampires one is generally accustomed to. There’s not much that’s alluring, beguiling, or otherwise attractive about them.

Paula Raymond is, shall we say, a less than convincing vampire queen, but Alexander D’Arcy plays the count with a certain air of suavity I suppose–the couple does drink their, uh, “Bloody Marys” from martini glasses after all. But D’Arcy comes off mainly like a discount Omar Sharif. Be that as it may, he was apparently a darling of Russ Meyer, Roger Corman, and one or two other B-flick directors.

Speaking of directors, Blood Of Dracula’s Castle was helmed by none other than Al Adamson whose life is, tragically, more interesting than his movies. Adamson was murdered in 1995 by his live-in contractor which you can learn all about in Blood & Flesh: The Reel Life And Ghastly Death Of Al Adamson.

Right. So our story, such as it is, starts with a woman being abducted by a big ol’ monstery-lookin’ guy which immediately makes me think of Jonathan Coulton’s “Skullcrusher Mountain.” Opening credits roll, and we meet our young protagonists Glen and Liz during about 8 minutes of him photographing her at Marineland. You know there are gonna be problems when your talent is upstaged by the walruses in the background.

Glen gets word that he’s just inherited Falcon Rock Castle, like ya do. It seems the Townsends never got around to renewing their lease or something. This means they are, in fact, squatters. They are attended to by their butler, George, the scenery-devouring John Carradine who maintains a basement full of young women from whom to drain blood for the upper management. Carradine is assisted by Mango, the aforementioned monstery guy.

The cast is rounded out by Johnny who is either a serial killer if you’re watching the theatrical version or a werewolf if you’re watching the late night TV version. the events of the movie play out over a heavily padded 84 minutes. When Glen and Liz arrive at the castle at about a half hour in, it already feels like 84 minutes has plodded by. Lucky us, there’s almost an hour left. And yet, Blood Of Dracula’s Castle is not without it’s small charms.

I suppose it’s nostalgia that keeps alive my tiniest bit of fondness for this movie. As an impressionable tyke, my aunt and uncle would sometimes babysit me and my brother. They’d let me stay up with them and watch Chiller Theater with Chilly Billy Cardille (WIIC-TV Channel 11 Pittsburgh thank you very much). Even as a wee lad I knew this movie was awful, and thus my devotion to bad horror was born.