Originally I was gonna do another list of my favorite horror superheroes, but I decided against that in favor of a topic I haven’t covered. Then I thought about doing a list of killer robots, but figured I’d keep that on file to use in combination with something else later. But killer robots did put me in mind of the very closely related category of evil dolls.

As I stated a while back in 13 Rules Of Horror, dolls are evil, and I’ve been kicking this list around in my head for a while now. I should also point out that neither Brahms nor Annabelle will be on this list–too recent, too much still in the public consciousness, and I’d like to save room for some of the older and/or lesser knowns. I’m also focusing for now on movies only, so no spooky playthings from Alfred Hitchcock Presents or The Twilight Zone. Not yet. So here are 7 Creepy Horror Movie Dolls

Top 3 Argento movies in order: The Bird With The Crystal Plumage, Suspiria, and Deep Red. The mad puppet scene in Deep Red is not a major set piece, but for me it’s the most terrifying part of the movie. Whenever this fuckin’ thing comes skippin’ across the room…even though I know it’s coming, somehow that just makes it even worse.

It’s a scene happens early on in Barbarella. Barbarella gets captured by a bunch of innocent looking children. However, as per Rule #3, Children Are Creepy. Soon they’ve got Jane Fonda tied to a couple of poles while a bunch of chomping razor-toothed dolls walk toward her. I saw this at the Parkway theater in Sto-Rox when I was pretty young, and this scene freaked me right the hell out. 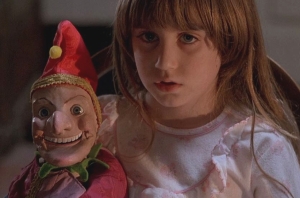 Just a couple years before Puppet Master, there was Stuart Gordon’s Dolls. It’s not the same premise, but they are decidedly cut from the same cloth. A bunch of folks end up stranded at the home of Gabriel and Hilary Hartwicke. Gabriel appears to be kindly, child-hearted toymaker who genuinely cares about the dolls he makes. Well, appearances can be deceiving. All the dolls here are spooky, but Mr. Punch, which Gabriel gives to, of course, Judy (ho ho), is an especially sinister jester doll.

I’ve written about Magic before. Fats is vulgar, obnoxious, and the dominant half of Corky’s (Anthony Hopkins) apparently split personality. There’s a little ambiguity about whether or not Fats is possessed of some kind of spirit or if that is all part of Corky’s delusion. 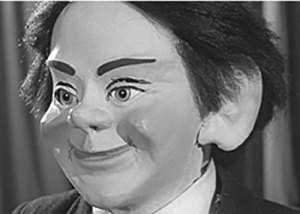 Devil Doll was a big hit on MST3K, and it’s one of the funnier Mike episodes (I’m a Joel fan myself). But taken on its own merits, Hugo is another terrifying little entity. It turns out that, as opposed to Fats, Hugo really is housing the spirit of the ventriloquist Vorelli’s dead partner. And Hugo wants out. The end is unsettling, and it’s one of a handful of MST3K flicks that I find genuinely creepy.

Almost a decade before Hugo hit the stage, another Hugo appeared in 1945’s Dead Of Night. This Hugo is without a doubt a forerunner to the next Hugo. As well as Fats. As well as to the events that transpire in Magic in terms of Corky’s breakdown. It’s another “whose personality is stronger, the ventriloquist or the dummy” scenario which, if you have to ask the question at all, you already know the answer. The end result is a bit different here and still chilling in its own right.

I’ve saved this one for last. Yes, I’ve also written about Trilogy Of Terror and its sequel. But He Who Kills bears mentioning again because it’s possibly the most unnerving doll I’ve ever come across in horror movies. It slaughters its way through not one, but two movies, and is arguably one of the most iconic cult movie images ever. And the picture of this thing hangin’ off Karen Black’s leg kept me up at night the first time I saw it in the ol’ TV Guide as a kid. As a collector, I’d like to have one of these. As a person with at least a moderate sense of self-preservation, I don’t ever wanna see one in real life.

There’s my list. As always, lemme know in the Comments which puppets, dolls, and dummies freak you out whenever you see them.