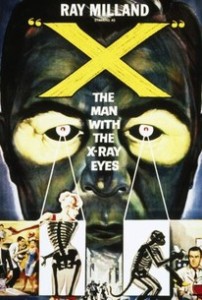 Whether it’s sarcasm, poetic justice, cruel but satisfying twists of fate, or the drama of knowing more than the movie characters know, we surely do love us some irony here at Castle Blogferatu. And that’s why I was particular entertained to jam my hand into The Cinematic Coffee Can only to grab X: The Man With The X-ray Eyes.

First of all, it’s Ray Milland, possibly the greatest ever example of someone character acting his way through a lead role. Not that I’m complaining. Any opportunity to watch Ray Milland being Ray Milland is just fine by me, and this is certainly one of those opportunities.

I can’t help but love this flick. The gags are bad, the acting is so melodramatic, and the final act is beyond outlandish. Milland plays Dr. James Xavier who is experimenting with eye drops that in theory will enable people to see more than just the spectrum currently possible for them. He’s been testing on monkeys, but they can’t articulate whatever the fuck it is they see, so they die of fright.

Huh. Can’t express your fright, so you die. Now where have I heard that before? Oh yeah, The Tingler. Anyway, Dr. Jimmy is unfazed by this minor inconvenience. What’s a few croaked over primates in the face of science right? Instead, he jumps right to the human trials. On himself. Apparently the whole monkey problem didn’t manage to raise any red flags. Instead he just, well, turns a blind eye you might say.

Turns out the drops work. At first they’re like a novelty. Our Professor X is able to see through people’s clothes, ho ho (like any straight white guy would). The effects, however, intensify as time goes on, eventually revealing some kind of indescribable shimmering quasi-form out there in the universe. By the end, he’s driven insane by it and rightly so. In fact, it’s one of the rare occasions when a movie manages to capture Lovecraftian horror without being anticlimactic.

Lemme ‘splain. As I’ve said before and doubtless will say again, cosmic horror does not always translate well to the screen. It can be profoundly difficult to portray something that A) defies description and B) can drive one into utter madness by its mere sight. Roger Corman pulls if off in this case, however. Like the monkeys in his experiments, Dr. Xavier is incapable of articulating what the hell he sees.

But it’s out there, it’s menacing, and it sees him (and us?) as clearly as he sees it. What’s more, there’s nothing he nor anyone else can do about it. Worst of all, as in so many Lovecraft stories, the very act of trying to explain this to anyone can only result in, at best, people regarding you as odd or, at worst, locking you up.

Also, not to go all liberal artsy on y’all, but it’s worth bringin’ up everybody’s favorite motherfucker, Oedipus. I don’t mean Dr. Xavier killed his father and married his mother. But in the play, the person who knows the truth early on is Tiresias, the blind prophet. When Oedipus is finally made aware of the truth, he gouges his own eyes out. Once Xavier sees the truth of our place in the universe and what’s out there waiting, he too performs an auto-enucleation.

It would seem the truth will not always set you free.

The final, twistedest irony is one that exists only in legend, and there are conflicting reports from Corman himself about whether or not this ending was actually filmed. Some sources claim that Corman confirms it was. Others maintain that Corman debunked it.

The story goes that Xavier wrenches out his eyes during a revival meeting amidst the preacher’s shouts of King James’s Matthew 5:29 and the crowd’s refrains of “Pluck it out!” Ah yes, that old time religion. They say it was good for old Jonah. Anyways, as the scene fades to black, Xavier cries out, “I can still see!” Jeebus, what an ending, if true. But is it? Who knows? Who cares? I have to believe it is. Besides, it fits the Lovecraftian theme perfectly.

Either way, that tale has been told regardless, and like that bygone vintage theology, it’s good enough for me. 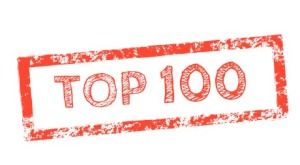 Wowzers, I’ve somehow managed to string together 200 of these ding-dang thangs! And yet, I’m still surprised each and every time I hit one of these li’l milestones. I always figure the moment is just around the corner when this all goes sideways, and the whole thing just collapses like a flan in a cupboard.

But since we’ve made it this far, I suppose yet another vaguely celebratory post is in order. And as further evidence that I’m not only a genre guy, for perusal at your leisure, I present my Top 100 Movies That Aren’t Horror Part II. I know, it probably should had been 200, but that’s a lot to come up with all at once. Besides, this plus the first 100, well, that’s 200 anyway. Oh, and I’m also avoiding documentaries again. That’s a whole ‘nother list.

So, another 100. Never let it be said that I only watch horror movies, damn it! 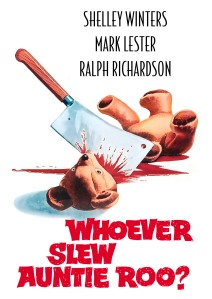 On a minor level, I was tricked by this movie in the sense that I reckoned it was something other than what it actually was. See, I really thought it was another Henry Farrell story. You remember Henry Farrell. He wrote What Ever Happened To Baby Jane, How Awful About Allan, What’s The Matter With Helen, and What Ever Happened To Cousin Charlotte (which became the screenplay for Hush…Hush, Sweet Charlotte).

So with a title like Whoever Slew Auntie Roo? you can understand my assumption that he writ this one as well, but no. Don’t get me wrong. I woulda watched it regardless. It is an American International flick after all and definitely falls into the Grande Dame Guignol subgenre I love so very much (ironically, though, much as I seriously dug Bloody Mama and What’s The Matter With Helen, I’m not a real big Shelley Winters fan).

The story involves a rich widow named Rosie Forrest, known affectionately as Auntie Roo. Every Christmas Eve, she hosts a big overnight party for 10 children from the nearby orphanage. Yeah, that’s not creepy at all. Specifically she selects the 10 nicest children, whatever the hell “nicest” means.

Not included among those children are fairly unpleasant Christopher and Katy Coombs, mainly because Christopher is an annoying and incorrigible storyteller who likes scaring the other kids with his wild imaginings. Katy is, well, a whiny little thing. However, the two stow away in the car with the other children and head to Forrest Grange–Auntie Roo’s mansion. This is where things start getting twisted.

Auntie Roo’s daughter, Katherine, is dead y’see, her mummified corpse kept in a special room. Katy, it turns out, is the spitting image of Katherine, leading Auntie Roo to obsess over and ultimately kidnap her. The intent is for Katy to become the replacement daughter. In his attempts to free his sister, Christopher ends up getting them both trapped. I won’t give anything else away as this is one bizarro little psychological horror that’s well worth your time.

I will, however, point out what is, to me, the movie’s most entertaining aspect: its fairy tale nature. It even ends on a “Hansel And Gretel” quote, and that theme is worn on the movie’s sleeve with all the subtlety of a drag brunch. For one thing, Auntie Roo is “Rosie Forrest,” and her mansion is “Forrest Grange–“rosie” as in pleasant and “forrest” as in “forest,” as in the woods which is where these kids are going: an inviting house in the woods for a big party and lotsa treats.

Auntie Roo later captures the two orphans (orphans and poor kids being another classic fairy tale element) and puts one of them to work fetching wood. Christopher is convinced that, as in Hansel and Gretel, Auntie Roo is a witch who plans to eat them. She also at one point locks them in, of all places, the pantry.

Okay I lied before. There is a spoiler here after all which is the fact that, as befits Hansel and Gretel’s storyline, Auntie Roo gets burned up by our two, uh, endearing scamps. So if you like the grim in Grimm’s Fairy Tales (the way they’re supposed to be), this gruesome tale is for you. Oh, and keep an eye/ear out for one of the movie’s weirder “highlights,” the menthol-cool stylings of Shelley Winters singing “Titwillow.”