It’s 8:53am as I begin today’s post, and already the day is full of regret. For one thing, it has been a day. Finally got a new car which took waaaaaay longer than the couple of hours it should have. But that’s another story for another blog. It’s 6:37 now, and I still haven’t posted this thing.

Second, I didn’t know until late last night that July 6 is also Janet Leigh’s birthday. How could I, of all people, not have known that? Nothing against Cobretti & Robin (which would be a great cop series), but it woulda been a way better post as a marathon. Plus ending any post with Psycho can only be an improvement. 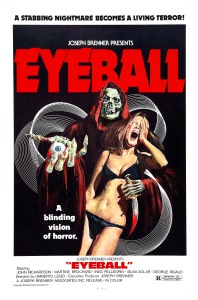 Regret #3 is that the movie that popped up for consideration today which is Umberto Lenzi’s Eyeball (I mean, Umberto Lenzi’s movie entitled Eyeball, not the man’s actual eyeball. That would be gross).

I don’t mind that so much, but dang, if only I’d thought of this one a week ago. Then I mighta rounded up all the vision-related horror movies I could think of and created a theme for the whole month. Jul-eye. Or Jul-eye-ball. Or something. Oh well. Spilt cow juice, shedding tears, blah blah blah. Anyway, Eyeball came out in 1975. Giallo was all the rage.

I mean come on. The original title followed one of the typical giallo formulas: a color, an animal that has nothing to do with the plot and never shows up in the movie, and an object. In this case, Red Cats In A Glass Maze.

I wonder how many rejections there were in the brainstorming session. Like, who tossed out Blue Wombats On Pink Taffeta? And this one’s also pretty gruesome for its time, certainly enough for it to earn an R rating.

We have a bunch of Americans doing the tour bus around Spain thing. The problem is, some red-cloaked killer starts dispatching said turistas at the individual stops. Oh, and the killer also gouges out their eyes (possibly to avoid leaving, y’know, an eyewitness). So much for, I guess, sightseeing. And yet, nobody seems to, ahem, see fit to stop the tour.

Then again, it’s giallo. Such lack of, uh, foresight is typical and playing fast and loose with the “logic” of the narrative is kind of a thing. As such, there’s a big ol’ heapin’ heppin’ of red herrings to misdirect the tourists and the viewer. It’s also been suggested that the red cloak may have been influenced by (and this ain’t even a pun!) Don’t Look Now. Maybe. But Lenzi more than makes up in lurid bloodletting what he loses to Nicolas Roeg’s stylish visuals.

Lenzi is no stranger to giallo or horror. Indeed, he was a major contributor to one of the other big trends of the mid-70s early 80s, the anthropophagus boom. His arguably most notorious piece of work, Cannibal Ferox, came hot on the heels of the villainously over rated, nearly unwatchably (even with one eye) bad Cannibal Holocaust and was billed at the time as the most violent movie ever made.

Eventually, as always happens in giallo, we find out who the killer is, and it makes a weird, based on something outta the past kinda sense. Overall, Eyeball is definitely worth a, um, peek.