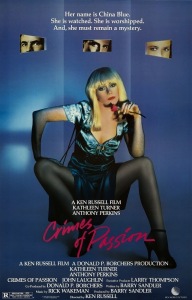 I’ve been meaning to rewatch Crimes Of Passion for some time now. I’ve only seen it once, back in 1984 when it first came out. My young self was already crushing on Kathleen Turner, plus there was Anthony Perkins. Sold. I was, as they say, stoked, and my 1984 self loved this movie. Sadly, wow did this not age well.

To begin, Ken Russell was a fucking weirdo. Like, Pedro Almodóvar weird. Alejandro Jodorowsky El Topo weird. Oh sure, you can follow The Devils, Gothic, and Lair Of The White Worm with all their trippy weirdness and not very deeply repressed sexuality. You can get swept up in and carted off by the hallucinogenic bonkersosity of Altered States, Tommy and Lisztomania. But Crimes Of Passion? It’s…

I mean, I can’t even begin to attempt to cover all the things this movie tries to be and do.

Uh. Okay. Kathleen Turner is Joanna Crane, a fashion designer. She gets her kicks by going out at night as a hooker named China Blue. One of her, uh, semi-regulars, Peter Shayne (Anthony Perkins) is a whacked out religious fanatic preacher hellbent on “saving” China.

In addition, Joanna’s boss thinks she’s selling clothing patterns to a competitor and hires electronics store owner and part-time amateur surveillance dude Bobby Grady to spy on her. Since Grady is having marital problems (his wife, Annie Potts, has no interest in sex), he ends up in a very, um, enthusiastic encounter with China and is immediately smitten.

To call this movie gritty is like saying someone in the path of a tidal wave may experience moisture. Every set piece is sweaty, grimy, and makes you want a shower. The interpersonal conflicts take a distant backseat to this noir-ish naturalism.

But that just barely scratches the squalid surface beneath which lurks sooo much more. Possibly too much. Let’s start with China herself. Just her name is a nice piece of wordplay, china being, y’know, china–the precious, fragile “good dishes” your mom saves for company. Blue is a long-time synonym for racy, naughty, etc. Come to think of it, Peter Shayne is worth considering as well. Peter is obvious, and Shayne is awfully close to “shame.” Huh.

Anyway, China’s outfit–blonde wig, baby blue dress–gives her a distinctly Alice vibe, and the night time world she literally skips and laughs through is definitely a rabbit hole to one tuh-wisted Wonderland. I can’t go any further than that in terms of sorting out who represents The White Rabbit or Red Queen or whatever, though Perkins is certainly a good argument for The Mad Hatter.

Of course, the line between Joanna’s worlds blurs significantly to the point where they predictably collide. Sounds interesting, right? And in many ways it is. But there are problems, little ones that could be easily have been overlooked in smaller numbers, but in this case their sheer volume starts to weigh the film down.

First off, ain’t a whole helluvalotta actin’ goin’ on here. If this were the first thing I’d ever seen Kathleen Turner in, I’d have said “Wow. She can’t act.” And I loved her in Body Heat and Romancing The Stone. The best and possibly only thespianism on display here comes from Annie Potts and Anthony Perkins.

Still, there was potential. China could have been a strong, independent, in command of her own destiny kind of character. On the other hand, there’s an unfortunate and frankly naive portrayal of sex work here. Joanna reeks of privilege in the sense that she can take or leave that world any time she wants. Her livelihood is not dependent upon it. But whatever strength there was to be had is savagely undercut by white male power.

To be fair, maybe The Right Reverend Shayne is merely the face of the rabid anti-sex moralizing that’s plagued America since the Pilgrims left Plymouth and landed in, well, Plymouth. Either way, for all China’s bravado, she/Joanna is reduced to another cowering ineffective female figure who can only save herself through accepting the overarching power and symbols of maleness. Wow does that sound pretentious. Academia here I come.

Rick Wakeman’s (yes, Rick Wakeman from Yes) score is a very 80s highlight, and the weird-ass little music video for “It’s A Lovely Life” with Maggie Bell’s vocals starts a recurring idea that probably has something to do with how empty and ultimately ugly suburban life is. In that sense, at least in China’s world, you’re alive. Very “World Is Too Much With Us.”

As for the very end, it’s not bleak so much as cynical in terms of closing with a really lame sophomoric sex joke. But hey, at least she saved herself. In a way. I guess. Right?