A long-standing bone of contention amongst me, my favorite colleague, and one or two other folks, has been and continues to be whether or not I hate musicals. I maintain that I do, but then I get hit with a list of musicals I in fact have seen repeatedly and/or own. I’m then expected to somehow square that with reality. Fortunately, I’m immune to such logic and reason, so without further explanation, here are my Top 5 Horror Musicals (Even Though I Hate Musicals).

I’m limiting this to film versions, not stuff that hasn’t come off the stage yet. I’m also sticking mainly to things that were in fact written originally as musicals, not something that was made into one after the fact (Phantom Of The Opera and Sweeney Todd notwishstanding). And that’s good because I don’t think I plan on ever seeing the musical versions of American Psycho, Carrie, or The Exorcist. 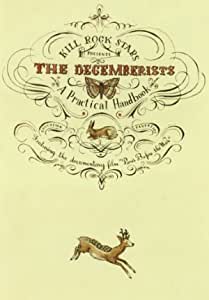 Yeah I know. I’m probably stretching things a little past what’s reasonable, but hear me out. I saw this on The Decemberists: Practical Handbook, so it kinda counts as a film version. As for the song itself, it clocks in at about 8 minutes and has multiple voices (well, a female chorus along with Colin Meloy). So, yeah, I’m counting it as a mini-musical. But horror? Well, two guys in the belly of a whale, and one wants to murder the other one. You do the maths. 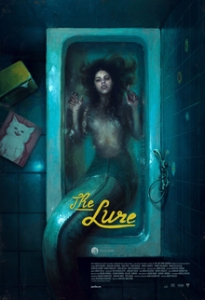 My favorite Polish mermaid horror musical. As of this writing, very likely the only Polish mermaid horror musical, but this is no time to quibble and argue. No, let’s bring on the homicidal neck-biting heavy metal mermaid strippers. If you haven’t seen it, imagine if Ken Russell had directed a film version of The Little Mermaid after reading “Dagon” or “The Shadow Over Innsmouth.” 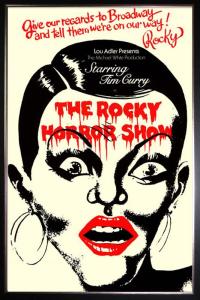 I mean this had to make the list, didn’t it? Back when I was young & thin & pretty, my friends and I would trek into Oakland to go to Rocky Horror. Even now, I’ve been known to perform my own rendering of “Sweet Transvestite” at the occasional karaoke night. My kids tell me the remake is pretty damn entertaining. I haven’t seen it yet. What is there to say about this that hasn’t been said? Even people who don’t know anything about horror or cult movies know at least something about this. It’s literally become a cultural icon.

Of course this had to be on the list as well cuz vengeance if nothing else. Don’t we all have at least one person we’d like to grind up and feed to other people? No? Just me? Huh. Anyway, I like Sondheim as both a writer and a sadistic bastard who likes to torture singers. Apparently his very long lines can be, shall we say, challenging, at least according to the likes of Johnny Depp and Helena Bonham Carter. I don’t in general like his musicals, but in each and every one of ’em the man can turn a phrase, so I love some individual parts of individual songs. Except West Side Story. Seriously–the musical version of Romeo And Juliet? The worst of both worlds. Ironically, I really hate the Angela Lansbury stage version of Sweeney Todd. But Tim Burton? Mwah.

The Haunted World Of El Superbeasto, Phantom Of The Paradise, Thumbelina (sure watches like a drug trip to me anywaysat least) 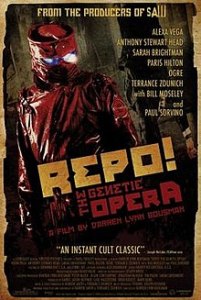 This movie is the reason for this whole list. See, my daughter and her wife have been harassing me to watch this for a long time. Last night I finally followed their advice. Apparently it’s their generation’s answer to Rocky Horror. I love this! It’s SO very much fun! I’ve seen it described as Rocky Horror meets Blade Runner, and that’s fair but only scratches the surface. Repo! has elements of fucking everything! Take some elements of Frankenstein, Phantom Of The Opera, Sweeney Todd, and more than a little Greek tragedy (including a one-man chorus in the form of my favorite character, GraveRobber), then give it all a quasi-Tim Burton/Frank Miller/Sin City look and vibe. Even that doesn’t do it justice. In the not-too-distant future, an epidemic arises that causes widespread random organ failure. Out of this arises GeneCo, a company that supplies replacement organs that come with, of course, a payment plan. If you miss a payment, the repo man comes for said organ. And that’s just the beginning. Also, two words: Paris Hilton. Yeah, you’ll be surprised.

Right. So there’s lotsa stuff what ain’t on this list, stuff like Cannibal! The Musical, Dr. Horrible’s Sing-along Blog, Shock Treatment, and some others I ain’t seen yet. On one hand, that might be surprising since they’re horror musicals. On the other hand, they’re horror musicals, and I. Hate. Musicals. On the other other hand…no, wait, that hand brought me a sandwich. Thank you, Thing.

Also not on this list is Phantom Of The Opera cuz ick. I do love Minnie Driver in it, but Gerard Butler? No. I saw 300 long before my kids made me endure Phantom, so I just keep waiting to hear “SparTAAANNNS!” And finally, the one I hate the absolute most, as a musical, as a horror comedy, as a movie in general, has gotta be Little Shop Of Horrors. Yeah I said what I said, and I stand by it. I’ll be in the Comments alley out back if anyone wants to do anything about it.