Shocking as it may seem, there are some areas of interest here at Castle B other than horror movies. I know I’ve mentioned elsewhere that, as genres go, Noir runs a close second to horror for me. But I’m also a big fan of documentaries and true crime (okay well that one probably isn’t surprising).

But there are also books, books, books. Between DVDs, books, masks, and horror memorabilia, my apartment is a Marie Kondo nightmare (y’know what? Screw that. Every single bit of it sparks joy). RIght, so I love horror fiction, but I’m also a fan of nonfiction, and for some inexplicable reason (other than the fact that it’s some of the best writing on the planet), I’m a huge fan of food writers. Lots of Anthony Bourdain, Jonathan Gold, and Calvin Trillin on the shelves.

There are, af course, stacks of books about movies and not just horror. But horror is what I’m gonna focus on here with my list of Top 10 Books About Horror Movies.

Kay studied film and has worked in the industry itself, so he has some insight into his subject matter. The 1st edition is a fun, handy, and extensive catalog of zombie flicks from White Zombie in 1932 to the god-awful The Invasion in 2007. The 2012 2nd edition adds post-Aughties stuff including the wildly overrated Walking Dead plus “Upcoming Zombie Flicks.” He also traces zombie evolution, squeezes in some cool little interviews, and has scores of movie stills and poster/promo art. Rating system is fun and he enjoys takin’ the piss here and there.

What an unnerving little trip down memory lane this is. First, this book either lets you relive your irreparably damaged formative years or shows some of you younger folks why some of us are so fucked up. The authors cover lotsa ground here, from Dr. Who to The Owl Service to Children Of The Stones to Play For Today. Second, this is how I found Apaches, one of the sickest but greatest public safety films ever made (and butter me parsnips there were scads of ’em).

The entire title is Step Right Up! I’m Gonna Scare The Pants Off America: The Memoirs Of America’s Master Showman. That should tell you much of what you can expect. Castle was indeed a showman, the B-Movie PT Barnum if you will, and his book about his life, career, and exploits is no exception. It’s gets a bit self-congratulatory as Castle simultaneously toots his own horn and pats himself on the back. Still, there’s some good insight into and entertaining stories (more like legends?) about his filmmaking.

#7 The Lurker In The Lobby

Along the same lines as Zombie Movies: The Ultimate Guide, this is mainly a catalog of Lovecraftian-themed movies. Mind you, they aren’t all adaptations, but they’re all movies that have some kind of cosmic horror/weird fiction premise or at least vibe to them.

I really don’t like this guy. 20 years before he and Russell Brand (who I do like) made their sicko prank call to Andrew Sachs on Brand’s radio show in 2008, Ross hosted The Incredibly Strange Film Show (Very 80s. Seriously. He coulda passed for a member of The Human League. On the show, Ross talked about specific directors and sometimes even interview them, including folks like Doris Wishman, William Castle, even Dario Argento. It’s a fun overview despite Ross. When I found out it was a book, I had to have it.

#5 The Psychotronic Encyclopedia Of Film 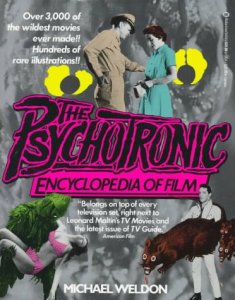 Now we’re gettin’ straight to the heart of this thing. Quickly becoming a cult classic in its own right, Psychotronic was formative for a lot of us who adore the weird, the schlocky, the exploitational, the grindhouse-y world of cult cinema. It’s difficult to define what makes a movie “psychotronic,” and Weldon makes a good attempt. A more refined explanation (and a great discussion) by Frank Moraes, though, can be found at Psychotronic Review. For me, it’s a feeling, a vibe I get from a movie more than anything else.

I first came across this in Allston, Massachusetts. I was young and thin and pretty back then and used to read poetry at an open mic called Naked City every week. The open mic was in a large 2nd floor vestibule of a building on Brighton Avenue called The Allston Mall that housed a number of New Age, indie, and off-center shops and offices. One was a little book shop called The Primal Plunge. Sadly, all that’s gone now, but it’s where I saw this book. The cover is from The Mask which I had not yet seen but boy did I want to. At first I thought the book was connected to the show I mentioned, but no. Other than covering the same kinds of films, they’re unrelated. But I wanted a copy for a long time. Finally got one off The Interwebz about 5 years ago.

#3 Unsafe On Any Screen: Cinematic Sleaze And Cheese

There are 3 things that eventually got me writing a movie blog. First was Roger Ebert. I used to watch At The Movies and Sneak Previews like some folks go to church. I love it when he hated a movie. Second was Joe Bob Briggs back when he did Joe Bob’s Drive-In Theater on The Movie Channel and still does on Shudder. That was the kind of reviewing I wanted to do. Finally there was this guy, Scott S. Phillips. This book was what made me finally pull the trigger and say, “Yeah! I wanna do something like THAT!” And here we are. I struggled mightily to not steal his “Greased Ape Scale” rating system which is as follows:

This represents how many greased apes I’d wrestle to see a particular movie (0 apes=bad, 5 apes=fine entertainment). This is supplemented in some cases by the “Cheap Bourbon Scale” (representing how much sauce you’ll need to make a flick seem worthy of wrestling more greased apes). Remember: a movie high in Apes but low in Bourbon is quality stuff–yet, oddly enough, booze seems to help a high-Ape movie as well).

The man’s a visionary, and if there’s stuff here on Blogferatu you don’t like, he’s at least partially responsible.

Ah, Robin Bougie, a man after my own heart. I love this guy! I ran into Volume I shortly after I first started blogging, and it reaffirmed that, indeed, I’m not the only person who’s like this. He covers everything from superweird porn to grindhouse to cult and pretty much everything in between. In particular his essay “Fuck You, Moviegoer!” (p. 56-8) remains one of the funniest pieces of harsh but accurate condemnation and judgment passed on stupid people that I’ve ever read. This is also where I found out about the mullet-tastic Things, an experience for which I will be eternally grateful but will also eternally seek retribution. If you know, you know. Hamlet said “I could be bounded in a nut shell and count myself a king of infinite space.” If you gathered up all the fucks Bougie has to give and put them in, I dunno, Cinema Sewer admittedly ain’t for everyone.

Creature Features: The Science Fiction, Fantasy, And Horror Movie Guide
The Fifty Worst Films Of All Time (from 1978. And they got a lot wrong)
The Geek’s Guide To SF Cinema
The Sleaze Merchants: Adventures In Exploitation Filmmaking
They Came From Outer Space

Let’s end, predictably I’m sure, with a classic. Before it became one of my all-time favorite documentaries, this was a book. Truffaut (who I’m not a devotee of incidentally) tape recorded something like 60 hours of interviews with Hitchcock. That became the book which in turn became the basis of the film. But there’s so much stuff in those pages that never made it to the screen. It’s a big book but a thoroughly enjoyable and surprisingly fast read. One of the things that’s so engaging about it is Truffaut’s obvious love and admiration for Hitchcock and his movies. Pore over this one, and I guarantee there are some Hitchcock scenes you’ll never be able to look at the same way again.

So there ya go. Get a book.