As I mentioned a few posts ago, film is not an exclusively visual medium. The list of visually stunning movies, however, is arguably endless, from Caligari to Nosferatu to Metropolis to Vertigo to The Birds to The Dark Crystal to Legend to Midsommar to Mandy. And that’s just right off the top o’ me ol’ gulliver.

But sometimes, visuals become the one and only thing a movie has propping it up, and sometimes, admittedly, that’s enough. There’s a couple movies below with 12 Skulls based solely on their visual appeal and not because I loved them. Other times though…yikes. Here then is a quick list of 5 Beautiful Disasters.

First of all, as anyone who’s wasted enough time reading the blog knows, I’m not a vampire fan, and I really can’t stand any iteration of Dracula including/especially the book. Still, I slogged through this version mainly to see Tom Waits (one of my top 3 favorite musicians) and how he handled playing Renfield. Other than that, I doubt I’d have gone to see it at all. That said, it was something to see on a big screen. I’m a sucker for period pieces for one thing, even the ones that aren’t horror. I have a Coppola friends who refer to these as “hat movies.” So what the story lacks in interest the movie makes up for in spectacle.

Not everything Guillermo Del Toro turns his hand to becomes a masterpiece. Now, I don’t hate Crimson Peak nearly as much as a lotta other folks, but I am well aware of its shortcomings. Its 2-hour runtime gets a bit bogged down here and there, and the ending ain’t hard to figure out well ahead of time. But the period costumes are a visual treat, and the color contrasts, especially the reds and whites of the surroundings, are stunning.

#3 The Lord Of The Rings 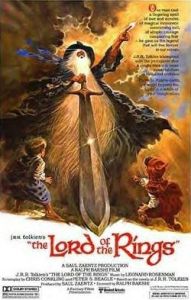 I was enchanted by The Hobbit when I first read it over 40 years ago. I’ve reread it a number of times, and because of my initial joy for a good story well told, I moved immediately to The Godforsaken Trilogy. Yeah, I said what I said. I am not a Tolkien fan. Don’t get me wrong. Mad props for the world building, but man, there’s some tedium to be found. But when the Ralph Bakshi version dropped in 1978, I had to see it. I mean come on. Ralph Bakshi. Fritz The Cat. Heavy Traffic. Wizards, Spider-Man (1967-70). As such, it was indeed a spectacle, parts of which, like the orcs and the ringwraiths, were fairly terrifying. But as a moviegoing experience, not even Bakshi could make the story interesting or make me care.

Another beautiful movie to watch but holy hell was it booorrriiinnng. I kept looking at my phone I dunno how many times to see how much longer I was gonna have to sit through this. Bear in mind, I won’t bail on a movie. Never have. Never will. I’ve come close, and there’s a growing list of movies I straight up refuse to watch, but once I start, no matter how bad it is, I won’t leave a movie. By and large I don’t have this problem with books. I’ll shut down a book inside of 3 pages (ahem Twilight). Still, the combination of Catherine Deneuve, Susan Sarandon, and David Bowie before his character takes a downward turn, well, they’re pretty just to sit and look at.

Wow I intensely dislike this movie. It’s a strange experience for a movie to be endlessly watchable and dreadful at the same time. It gets downright silly in a lot of places, and never really seems to make up its mind whether it was horror, parody, comedy, or all three. But damn it’s beautiful to just sit and look at, and I’ve done so a few times. Anna Biller does a jaw-dropping job capturing the look and feel of 1960s Technicolor in terms of lighting and palette. The sets are stylish and crammed with so much detail that it’s almost a visual onslaught. Seriously, some of the set pieces, like the Stepford-esque tearoom, are overwhelmingly gorgeous.

And that’s my list of lovely messes. What’s on your list of captivating catastrophes? Let me know in the Comments.