It’s been a minute since I thought about movies that aren’t horror. It’s probably on my mind now because I’m working on a list of all the not-horror movies I’ve seen over on The Crunchy Frog (which, admittedly, I’m not keeping up with very well). The upshot is that I now have a third installment of 9 Movies People Might Not Expect Me To Love.

Everything about this movie is bad bad bad bad bad–the “acting,” the martial “arts,” the fight choreography (which was created by dancers), the “special” effects, all of it. Add to that Bruce Leeroy, the stupidly named Glow (which I guess is supposed to be chi or The Force or something), and the just as stupidly named Sho’nuff—The Shogun Of Harlem. But it’s not just bad. It’s also mindnumbingly dumb. And yet, I own it. I’ve watched it multiple times. And Vanity is cute.

When I put Patton on the list for my first foray into movies outside of the horror realm, I mentioned that I don’t like war or movies about war in general. Same goes for most cop movies. But there’s just something about the first 3 Dirty Harry flicks that I find endlessly appealing. Reasons for this include that menacing Clint Eastwood voice, the dispatching of really bad bad guys, and Harry’s anti-authoritarian streak, especially toward administrators with little to no experience with crime or even being out on the street but who nonetheless hand down idiotic rules and regulations about how to do the job. Substitute the words “crime” and “street” with “teaching” and “classroom,” and that’s what life is like where I teach. Huh. Interesting.

Again, war. Ugh. But this movie is just so super-entertaining and fun (very weird language to use in terms of a war movie) to watch. Well, mostly. Donald Pleasance doesn’t end up so well, as don’t 49 of the other prisoners including Richard Attenborough. But it has Steve McQueen, and of course he lives, cuz he’s Steve McQueen. Who else can steal a Nazi motorcycle, ride it through the Polish countryside jumping barbed wire fences, and almost escape nearly ending up in, I dunno, Paris or something?

I’ve said it before, and I’ll say it again. If I’m not looking for horror, then gimme a good hat movie any day of the week. In truth this is a strange matter because I really don’t like Jane Austen. I’ve never finished a single one of her novels. And yet, I love a shocking number of movies made from those novels. To be fair, the versions I love got a lot goin’ for them including acting, score, and stunning visuals. This version is Emma Thompson, Hugh Grant, Kate Winslet, and the scene-stealing Alan Rickman. And whilst we’re on the subject… 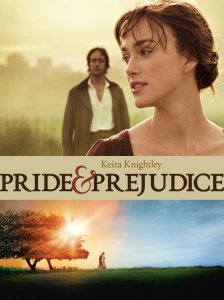 Like Autumn De Wilde’s Emma and Ang Lee’s Sense And Sensibility, Joe Wright’s Pride & Prejudice is just imminently watchable, as much for the English estates and countryside as for the interaction of Keira Knightley with, well, everyone in the film. Other highlights obviously include Judi Dench, Donald Sutherland, Tom Hollander, Rosamund Pike, and an unrecognizable (at least to me) Carey Mulligan. There are also scant acting examples that equal how well Brenda Blethyn created Mrs. Bennet to be every inch as detestable as Lady Catherine. I think I actually dislike Mrs. Bennet even more. Also, hooray for exemplary vegetables. If you know, you know.

It genuinely pains me to admit this because I don’t like musicals and genuinely despise the burgeoning galactic empire that will one day reduce us all to mere thralls of our Disney Overlords. But Dick Van Dyke is lovable, and Julie Andrews was able to give a big ol’ fuck you to Warner studios when she got Best Actress they said she wasn’t pretty enough for My Fair Lady. I don’t use this word often, but the movie itself is, well, delightful. I tried reading the book. Didn’t get far. I did read enough of it to know that Mary Poppins can be a little bit of a jerk, and you can actually kinda see that peek through just a bit in the movie.

So yeah, not a fan of violent cops. Bounty hunters, however…and look! It’s Steve McQueen! Again! Must be a man-crush. I actually wanted to be a bounty hunter for a while, especially after I saw this movie. I even begged my mom for the same style jacket (I was 15 gimme a break). The movie is based on the real-life exploits of real-life bounty hunter Ralph “Papa” Thorson played by a 50-year-old Steve McQueen who still managed to pull off maximum cool in what would be his final role. Admittedly Paramount was clearly trying to take advantage of Steve McQueen’s Steve McQueen-ness. But in my case, it totally worked. I love this movie and saw it 3 or 4 times whilst it was in the theater. 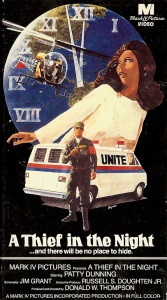 This is a recent addition. I didn’t know this even existed until my favorite colleague and I stopped at a thrift store in North Carolina. She snagged this from the shelf and said I had to get it. When she told me what it was, I was sold. See, back before Tim LaHaye started his cynical bid for those evangelical dollar signs by appealing to all them thar “come the rapture this car will be unmanned” whack jobs, there was A Thief In The Night. Even LaHaye admits Thief’s influence on his right-wing christian nut job Left Behind series. In my pantheon of Stuff I Ain’t A Fan Of, organized religion will be forever safe at the pinnacle. Even war is a distant second. But as rabid evangelical propaganda and brainwashing go, A Thief In The Night is primo viewing in same sense as, say, Apaches or And Then It Happened. It truly is that level of fearmongering, exploitational greatness. Apparently lots of kids who saw this in the 70s cite it as a source of abject childhood terror. It’s also the first in a series of 4, count ’em 4 end times flicks.

Tough call whether to make this or A Thief In The Night #1. I settled on Roadhouse because, really, I gotta be in the right mood for fear-based prosetlytizing. But Roadhouse? If it pops up as I’m flipping through stuff on the Tee-Vee, I’ll leave it on. There’s a better than average chance I’ll stop what I’m doing and watch it which is weird since I own it. But it still sucks me in e’ry time. And it’s bad. Not Last Dragon bad, but bad. Swayze is profoundly not buyable as a stoic, Eastern philosophizing martial artist/bouncer. But at least the guy can act. In fact, the acting is pretty good given what this movie is: a contrived situation from which spring numerous bar fights. Plus Sam Elliott. What’s not to love?

And there you go, 9 more movies that people might not expect me to dig as much as I do.