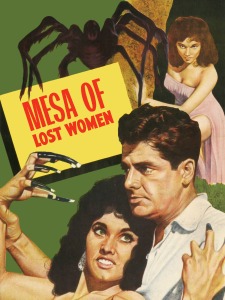 I mentioned Mesa Of Lost Women briefly in a list of Timeless Schlock, but it was brought to mind again yesterday during a conversation with a dear friend of mine.

I was lamenting how the reorginizating of my 1000+ DVDs was stalled, and I have stuff piled everywhere, and my DVDs need to be stored all nice & neat like. She said, “Need?” To which I responded “Yes. Need. What happens when I wanna watch Mesa Of Lost Women and can’t find it?”

And here we are.

At first blush, you might be tempted to think this was Ed Wood Jr. It ain’t, but it’s that level of greatness. If Plan 9 From Outer Space were Mt. Everest, you’d certainly pass Mesa Of Lost Women on your last leg to the summit. This movie is so gloriously dreadful that it totally deserves its own review.

But where to begin? I suppose we should start with the approximately 10 minutes of mostly voice-over narration. Don’t pay for anyone speaking any more lines than absolutely necessary. And that familiar sounding voice is neither Orson Welles nor The Brain from Animaniacs, but is in fact Lyle Talbot, a decent enough actor with some unfortunate choices like, I dunno, Plan 9 From Outer Space.

And of course there’s Tandra Quinn. Comparatively, she doesn’t get a whole helluvalotta screen time, but the time she does get? Hoo boy. That raven hair. Those talon-like fingernails. Those sultry eyes. Those deep dental impressions all over the scenery. Seriously, like Tura Satana in The Astro-Zombies, Quinn’s oh-so-cleverly named Tarantella is the highlight of the proceedings.

“What proceedings?” you ask. Well, true believer, sit back and relax whilst I weave you a tale of intrigue, terror, and busty spider women. Okay there might be some hyperbole there, but still. See, there’s this guy. His name is Dr. Aranya. All you Spanish 102 students out there might recall the word araña—Spanish for spider. Again, very clever. Anyway, the good d-octo-r is conducting some weird-ass experiments, and he’s invited a colleague, Leland Masterson, to come see.

Aranya (a pre-Uncle Fester Jackie Coogan) has created human-sized tarantulas as well as women with the arachnid behaviors and capabilities. Tarantella is one of these, and Aranya suspects she can potentially regenerate lost limbs and live for hundreds of years. Oh, and when this drug is used on men, they’re reduced to malformed dwarves. Cuz fuck men.

Anyway, Masterson loses his shit, so Aranya injects him with the drug which, in this case, only makes him criminally insane. He’s found wandering around in the desert/jungle/desert (yeah, both) and institutionalized. Most of this prelude comes as voice-over narration. Masterson escapes and makes his way to a bar where he encounters Jan Van Croft and his Doreen as well as George, the nurse who has tracked Masterson from the asylum.

Well, Masterson shoots Tarantella, kidnaps the other three, and hijacks Jan’s plane which, oops, crashes on Zarpa Mesa, home of our nutty professor. If you’ve kept track so far, that’s because I’ve left out a lot in terms of the tangled web that serves as a plot. There’s voice over narration, characters that disappear from the story, and flashbacks that don’t seem to belong to anyone in particular.

As much of a treat as Tarantella is, it’s also worth noting the fine acting chops of Harmon Stevens as Leland Masterson. The guy is so cringey I can’t tell if he’s an acting genius or your garden variety creepazoid. His line delivery sounds like he’s up to something ultra kinky but not in a good way.

So if you haven’t experienced this treasure for yourself, I don’t wanna say anymore. It’s every bit as captivating as it sounds. There’s also highly entertaining review over at The Monster Shack. Check it out—one of the funniest I’ve ever read.