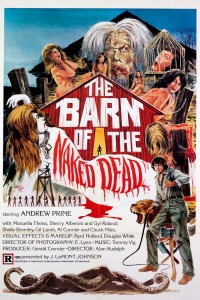 So my dude Film Miasma did this amazeballs post about The Teacher (1974) which got me all nostalgic-like for some early 70s grindhouse memories. Specifically it made me think of Trip With The Teacher (1975) which somehow connected me right back to 1974 again and Barn Of The Naked Dead (originally released under the much more accurate but waaayyy more boring Terror Circus).

Wowzers what a sleazefest. 3 showgirls, heads full of the American dream, quest after those eternal promises of glitz, glam, fame, and fortune offered by the glittering desert oasis that is Vegas. It’s 1974 which woulda made it a Fear And Loathing style Vegas, back when Vegas was Vegas and not some family friendly sand-bound version of Disneyworld.

Anyway, wouldn’t y’know it, their station wagon breaks down. Again, it’s 1974 which woulda made it a station wagon big enough for a playpen in what we as kids woulda called “the wayback” of the vehicle in that bygone era when we lived life on the vehicular edge with no seatbelts and no car seats.

Right. So along comes Andre, played by Andrew Prine. This name may not mean a whole helluvalot, but he’s got a decent 60s-70s TV resume, a number of 70s exploitation roles, some later TV work with Tarantino, and even shows up in Rob Zombie’s Lords Of Salem (2012). Oh, and he looks weirdly a little like John Malkovich.

Anyway, Andre of course comes to the women’s aid only to take them back to his middle of nowhere Manson-like complex complete with a big ol’ barn where he holds his newfound travelers hostage along with nine other hapless women who’ve had the misfortune of crossing his path. Okay, not much new here.

But now it gets weird. For reasons never adequately explained, Andre fancies himself a ringmaster, and he has his captives—chained up by the neck of course (okay, so the chains are clearly loose enough to pull over their heads, but don’t you pay that no nevermind). He “trains” them to perform various circus acts for him. He even has some caged animals to complete his whackazoidinal big top fantasies.

Oh, and he has delusions that one of the women is his mother. Oh, and he whips them. Oh, and he calls them “animals.” Oh, and sometimes just of yuks he smears a woman with blood, sets her loose, and sics a cougar on her.

But wait. It gets even weirder.

It just so happens that this property is conveniently located on or very near what was once an H-bomb test site. Somehow this information must’ve slid past the county clerk’s office or something. Either that or he was able to buy the place for a buck. Anyway, there’s a shed near the barn, and it houses a homicidal mutant. Big radioactive spoilers, it’s Andre’s dad, mutated by radiation poisoning. It’s not clear why Andre isn’t subject to this same fate.

Now, if all this sounds like a big ol’ heapin’ heppin’ o’ sideshow fun, it ain’t. First off, to say it’s misogynistic is like saying someone in the path of a tsunami may experience moisture. Along those lines, the captives really put the “duh” in duu-UMB. They’re meek, passive, easily subdued, and about as sharp as a bag fulla wet mice but with way less personality.

At one point, Andre accidentally leaves a key just lyin’ around. One of the women gets a hold of it, unlocks herself, then tosses it aside where nobody else can reach it. Andre ain’t much smarter (he did leave the key out in the open), and is totally not buyable as someone capable of wrangling a bunch of captives.

Still, I kinda dig the makeup job on dear old homicidal, shed-dwelling Dad. Sadly, his big moment is put off and put off until around the last 7 minutes. More spoilers, this is, uh, “complimented” by one of the captives repeatedly screaming “Lock. Him. Uuup!” to an exscapee (incidentally, something akin to this mantra will show up to greater effect 7 years later in Evil Dead). This is all further punctuated by Andre’s own suddenly shrill, schoolgirl-sounding shrieks.

I think one day I should do a list of Movie’s I’d Be Forced To Watch On A Loop In Hell. This would be in the top 5. Possibly the top 3.