More bizarro 1970s goodness today as we have a look at the drug-fueled 1976 mindjob, The Witch Who Came In From The Sea. According to The Wikipedias, the title refers to Botticelli’s The Birth Of Venus. I’m not sure why, other than a vague similarity between the the movie’s poster art and Venus on the halfshell. 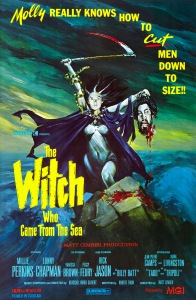 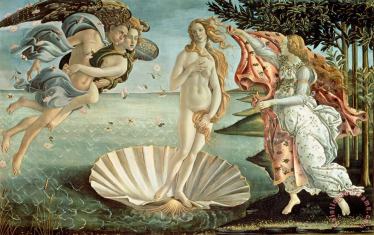 I mean…I guess I see a resemblance?

Anyway, our setting is Venice Beach (Venice, Botticelli, Italy…clever) where our main character Molly works as a bartender at a low-rent seaside bar. The owner, the colorfully named Long John, is also her lover. The phrase “Molly is troubled is an understatement” is, well, itself an understatement. It’s like when the folks doing your colonoscopy say you might experience some discomfort.

Y’see, Molly (Millie Perkins who started as Anne Frank in 1959 at the age of 21) harbors (Heh, get it? The sea? Harbor?) severely contradictory feelings about her father. On one hand, she has these romanticized fantasies about him as a captain who was lost at sea when she was little, and she tells these stories to her nephews.

She’s also convinced that her father “died for love” when in reality (spoilers) he died of a heart attack whilst molesting her. Molly, however, is pretty dissociative, so reality isn’t what you’d call one of her big ticket items. Add to this another minor complication which is that she blames herself for his death.

All of this could be a fine character study in itself, but no, put that check book away there’s more. Because of all this, Molly has become sexually repressed, and that repression starts to play itself out violently with some extreme reactions to various sexual encounters. She seduces men or lets them seduce her, then kills them. In other words, for all this talk about Venus, Molly is more like a siren luring men to their deaths.

Given that these men are dudebro-y scumbags, I’m on board with this (ooo, nautical reference #2). Her first set of victims is a couple of football players she ties up in what they think is gonna be some good ol’ bondage play. They would be wrong. She castrates then kills both of them, so I guess there is that whole Ouranos/Kronos/castration/birth of Venus thing goin’ on after all.

Later she hooks up with some has-been TV star, Billy Batt, at a party, ends up losing her shit and breaks both his wrists before he manages to toss her out of the room. This knocks her cold, and the other partygoers assume Billy was abusing her. Oops. When she wakes up, Molly recalls none of this.

Her final victim is Alexander, another dirtbag actor she met at the same party. He, it turns out, is steppin’ out on his girlfriend. Molly ends up slitting his throat then castrating him. So yeah, these model citizens don’t exactly add up to any net societal loss. Anyway, after this victim, she returns to Long John who wakes up to find her naked and covered in blood she claims is her own.

Did I mention drugs? There are drugs. And booze. And sex. You’d think that’d be more compelling, but it all turns out to just be strange as hell and surprisingly uninteresting or even titillating. Like Lynn in Pigs, Molly is prone to sporadic hallucinatory episodes regarding her father as well as images of her on a raft, at sea, sometimes surrounded by bodies.

But it’s the final scene that plops the WTF cherry atop this homicidal drug trip of a sundae. By now, the net has closed in on Molly, and the cops are on their way. Molly, however, has come clean to Long John (ironically she never tried to kill him some kinda twisted daddy issues thing I guess) and co-worker Doris. She’s essentially in the process of overdosing when her nephews show up. More major spoilers, so brace yourselves.

They snuggle up with Molly who apologizes because she wanted to take them hiking, but their mother wouldn’t allow it. She then announces, “I just hafta take a whole lotta pills today. And tomorrow everything will be alright.” What the hell?!? Oh but it’s not over, oh no. Doris grabs a bottle and pours a glass of full of who knows what? Could be water. Could be vodka.

Then we cut back to one of the nephews putting a pill in her mouth while the other one holds the glass up so she can drink. Mind you, these lads are barely teenagers, and probably not even that old. At this point thinking, “What the hell did I just see?” and reaching for the remote so’s I could rewind it a couple times and make sure. Then everyone stands around watching as she loses consciousness. Dang. 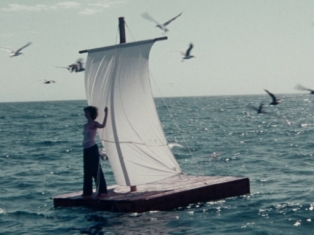 Finally, Molly either imagines or hallucinates that she is floating out to sea, alone, on a raft, which I guess is supposed to call back to all the Birth Of Venus imagery one last time. Yay symbolism. In the end, I guess Molly sums up the whole movie best when she tells her nephews, “Everybody’s a little crazy sometimes.” So, on that day you find yourself in want of a little nautical, mythological, arthouse-level psychosis, here ya go.