Alrighty, the first Full Moon Friday request goes out to Film Miasma who thought Baby Oopsie looked particularly promising. Looking around on The Interwebzes, opinion seems divided as to whether this is another Demonic Toys sequel or more like a spin-off. Based on the view from up here in the cheap seats, it seems like a decent mix of both. 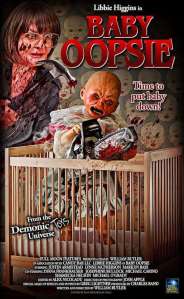 So, Baby Oopsie (who first shows up in 1992 in Demonic Toys as Baby Oopsy Daisy) starts off with Sybil Pittman, a vlogger who restores dolls. She shares a house with her drunk, gross, abusive aunt Mitzi and a border, Kristy.

Sybil regularly gets packages (from, she assumes, viewers)  full of doll parts, clothes, etc. One day she gets a doll head that looks like it’s been torched and hacked up (likely over the course of the Demonic Toys movies).

She begins the restoration but runs into a snag with its voice feature. As fate would have it (don’t it always?) she receives a mysterious gear with a pentagram on it which she of course puts into the doll. Like ya do.

The result is a perverse, foul-mouthed, baby-sized baby doll that is, frankly, terrifying (to be fair, probably not any more terrifying than an actual human crotch goblin/poop machine, but I digress).

Now, as we all know from Rule #5 of The 13 Rules Of Horror, Dolls Are Evil. Always. This one though…damn. It’s not CGI and not stop-motion. It just looks like some old, discarded doll you’d see in some abandoned house somewhere. And that is where some top-tier primo creepiness lies.

Makes me wonder though. What the hell is Charles Band’s deal with evil dolls and toys? Cuz there’s a shit-ton of Full Moon flicks about ’em. Anyway, Baby Oopsie comes to life, or I guess back to life, and goes on a killing spree, first offing everyone who causes Sybil any degree of misery, all of which is, on one hand, pretty standard, but on the other hand, really entertaining.

Be on the lookout as well for invective-laden one-liner references to Devil Doll, Talking Tina (Twilight Zone), The Exorcist, hell even The Wizard Of Oz. Sadly, that’s also one of the movie’s shortcomings. It’s tough to have a profanity-spewing doll and not evoke Chucky. Don’t get me wrong. It’s still funny, just not particularly groundbreaking.

Welp, spoilers, turns out all these packages have in fact been coming from Sybil’s fan/friend/neighbor Ray Ray. He’s been planning this all along so that, with Sybil’s unwitting help, he can create a Toy Hell on Earth. And really, why not?

So in looking over what I’ve had to say thus far, it’s clear that I really like this movie. It’s super campy and, if you go in with the right mindset, entertaining as hell to watch. But don’t misunderstand me. In no way do I mean to imply this is good. It ain’t. In fact, it’s dumb as a box of rocks, but everybody knows this, including Charles Band and director William Butler. And that’s precisely why it’s So. Much. Fun.

So yeah, this has been goin’ on for a minute. But let’s go one better. Ooga Booga (Doll Graveyard and Ooga Booga), Gingerdead Man (Gingerdead Man) and Jack Attack (Demonic Toys) all show up in The Bong World from Evil Bong. That means ALL these movies are connected! And I’m willing to bet that, without much effort, there’s a way to connect Tourist Trap as well some time in the future.

Man, this is good. Charles Band needs to call me.

PS- I’ve got a few lined up, but anyone else who’d like to request a Full Moon title, please do in the Comments!