I started blogging off and on a number of times back in the days when Blogger was pretty much all there was. A number of blogs came and went, most of which consisted of random commentary/observational rants and/or feeble attempts at humor, and they were all shortlived. I first started Blogferatu on January 19, 2016 (1/19 being Poe’s birthday), and kept is rollin’ for a few years.

Then, inexplicably, I got so tired of writing about pretty much anything ever that I shut the whole thing down. There were a couple of half-hearted, half-assed attempts to resurrect it, but… Typically I’d make it for a month or so, then stop again. And then, just over a year ago, I wasn’t writing anything and realized one of the problems with Blogferatu was something that can easily become the death knell of any endeavor.

I’d started taking it too seriously.

I wanted recognition, legitimacy, and for someone to knock on my door with a bag of money and say “We love you so! Please write for us. We beg of you!” I was trying to write what I thought other people would wanna read, not me. I had somehow managed to lose sight of that personal Gold Standard that has stood me in good stead for so years: Fuck ’em. And with that I decided to restart/reboot this whole damn thing.

But that doesn’t mean I’m not without others, longstanding as well as recent, whose attitudes, styles, and/or general demeanors provide me with models, goals, and inspiration. Now, in the interest of this blog’s nature, I’m not dealing with fiction, but with people who helped me realize that this was something I wanted to do and continue to reinforce my desire to do it.

If you’re an aficionado of bad movies, and you aren’t reading Cinema Sewer, you, my friend, are not living your best cinephile life. Bougie is opinionated, entertaining, no-nonsense, and best of all, utterly unapologetic. My weird-ass movie list is pretty damn extensive, and this guy routinely brings up titles I’ve never heard of. And for the most part, he loves ’em. It’s because of him I ever came across the movie Things, something for which I both bless and curse him. If you know, you know. The cover shown is from the collection Cinema Sewer Vol. 1 which I naturally have my own personal copy of that I picked up somewhere about 10 years ago. 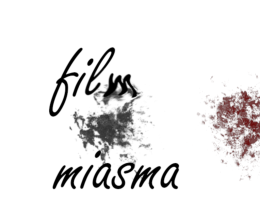 Boy howdy this is one of my all-time favorite movie blogs! And I follow a bunch of ’em. He’s got this great Joe Bob Briggs kinda vibe workin’ which is just a buh-last to read. We seem to share many of the same proclivities and peculiarities when it comes to movies as well. It’s always nice to find another uniquely calibrated cinematic mind that seems to click well with one’s own. Good to know we’re not completely alone in the bad movie universe. Plus his “filing system” *chef’s kiss* And speaking of Joe Bob Briggs…

I love this guy. Lawn chair, bottle of beer. I started watching him on The Movie Channel in the 90s, back when The Movie Channel curb-stomped the mortal piss outta all the other cable movie channels. I also very much like his current movie breakdowns by kill types, number of bare breasts, and terms like “gun fu.” In fact, Joe Bob and Roger Ebert are 2 big reasons I ever considered the possibility that one day I might write about movies in some form..

Long before she became the Martha Stewart-esque industry that is Ree Drummond, she wrote Pioneer Woman. It’s still there, but it’s not anything at all what it used to be. When I was first reading it, long before The Food Network and The View, Pioneer Woman was a blog about her personal life that was one of the funniest god damn things I’d ever read.

Specifically, Penn & Teller: Bullshit. I was a huge fan. Even now I use them when I teach Freshman Comp II as an example of how to construct an argument. I have to be clear that the language isn’t really part of the academic writing milieu, but the structure is all there. Plus I live in a somewhat, well, let’s say christianity-forward area, so subjecting folks to Penn Jillette’s not infrequent use of “motherfucker” is a plus. 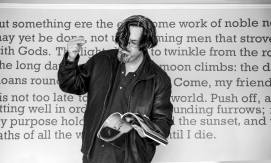 Hewitt was a local poet, photographer, musician, and music writer. He was an early force in Norfolk’s slam poetry scene back in the day and was instrumental in establishing our much beloved Venue. The man did not mince words, had some of the sharpest political insights around, and was one of the fiercest but fairest music critics I’ve ever read. I once read a review in which he said “These guys make me wish I’d contracted syphillis. Then I’d be deaf and wouldn’t have to hear them.” Hewitt was a close personal friend of mine as well. Sadly, he was taken from us a number of years ago by a tragic motorcycle accident. He is still desperately missed.

I love Waters as a director, but his book Crackpot and his show This Filthy World just reaffirmed that it could be worthwhile, entertaining, and fun as hell to find joy and value in the world of filth, shock, schlock, and general bad taste. If there were a walking definition of the word “louche,” it’s John Waters. 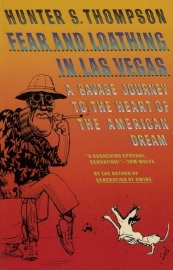 I once heard conservative fuckwit Michael Savage refer to Hunter S. Thompson as a minor figure in American writing. I dunno what kinda airplane glue this dude huffed as a kid, but he really overdid it. I don’t personally know anybody who doesn’t know who Hunter S. Thompson is, and I regard with deep mistrust any writer who claims to have never read him. He may not be for everyone, I’ll grant you that. He may not be as widely exalted by others as he is by his fanatically cult-like followers. But there is no doubt. The man Stomped. On. The terra. Every now and then, I might lash together a few raw observations in such a way that I can approximate a barely perceptible shadow of this man’s style, and when that happens, I pour some whiskey and call it day because nothing else I write afterwards will be any better. Fear And Loathing In Las Vegas and Fear And Loathing: On The Campaign Trail ’72 heavily informed and strengthened the “give no quarter/take no prisoners” I shoot for.

As always, the gap between 1st and 2nd is nigh indistinguishable. I think I’ve mentioned before that I watched Sneak Previews and At The Movies like it was my religion. I didn’t like Gene Siskel. At all. But even when I disagreed with Roger Ebert, I could see where he was comin’ from. And like Pauline Kael, he was willing to give a horror movie a chance. In fact, it was his review that led me to Massacre At Central High which he really liked, and I Hated Hated Hated This Movie is kind of a personal bible.

Food writers, man. I’ve been teaching literature for nearly 30 years as well as reading/writing for as long as I can remember, and I’m here to tell ya, ain’t nobody out there who commands the language better than a food writer, especially when they’re in takedown mode. People like Calvin Trilling, Jonathan Gold, and Pete Wells can all turn a phrase in a manner that will make you drive miles outta yer way to find or avoid the place they describe. But the gold standard for this, hands down, has got to be Anthony Bourdain. Kitchen Confidential was one of those books I read and said, “Yeah. I wanna write like that!” Right out of a Hunter S. Thompson kinda style, Kitchen Confidential is one of the finest reads ever. Bourdain didn’t just write about a subject. He lived it. No matter where he was or what he was doing—extolling the guilty pleasures of melted nacho cheese or Frito pie, bemoaning the structural defects of the club sandwich, or denigrating foodies—the man was all in.

And there they are, some of the writers who helped get me started doing this and help keep me going. And of course, I’d love to find out in the Comments who y’all read, learn from, and hold in high regard.