30 posts to go, kiddies! Nice to mark the occasion with a Full Moon Friday request, this one from Ann R who picked Subspecies, a movie I’ve long been meaning to get to. I think after Puppet Master, Re-Animator, and Trancers, Subspecies is another movie I’d consider one of the faces of Full Moon.

And thus begins the tale of the vampire Radu. Radu’s is a tale which spans not 1, not 2, but 4, count ’em 4 movies. The first opens with his father, King Vladislas, drinking from The Bloodstone, and lemme just say, who wouldn’t pass up a chance to see Phantasm’s Angus Scrimm for even just a minute or two.

Anyway, it’s festival time in the small Romanian town of Prejnar. Said festival dates back 500 years to the night the vampires slaughtered the Turks who had laid siege to the town.

Sadly, the vampires still had to feed on the grateful townsfolk until one plucky lad goes to Rome and steals The Bloodstone which drips the blood of the saints and can sustain a vampire and keep him from having to interact with the mortal world.

The movie opens with Radu’s return to Prejnar in defiance of his father having banished him. He has come to wrest The Bloodstone from his father who intends to pass it on to his younger son Stefan, Radu’s half-brother. But the king ain’t no sucker. Well he is, but, yeah, you know what I mean. He plans to destroy Radu and traps him with the trusty ol’ iron cage falling from the ceiling ploy. A simple but nonetheless tried and true classic.

Radu, however, has an ace up his sleeve. Literally. With an alarming lack of discomfort, he snaps off the ends of four fingers and lets them fall to the floor where they start to move around then morph into some I gotta say cute lil stop-motion demons. Seriously, you wanna pick ’em up and take ’em home like the ones 4 years earlier from The Gate. They act as Radu’s minions, their first task being to trip the mechanism that springs their master from his trap. 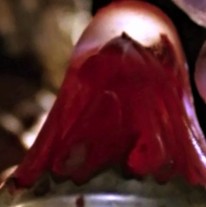 Right. So. Radu kills his father for The Bloodstone. Come to think of it, I have a few friends who are glassblowers. I wonder if I could pay one of them to make one of these for me.

Back in town, Michelle and Lillian have arrived to meet fellow student Mara in order to do some ill-defined research about Romanian folklore (long before Hostel made it substantially more terrifying to seek lodging off the beaten path in Central Europe).

The rest of the story plays out pretty much as you’d expect—locals provide backstory and warnings, good brother battles evil brother, Radu pursues the girls, blood gets sucked, breasts get exposed (not as many as you’d expect for a Full Moon flick), Stefan falls in love with one of the hapless victims (Michelle, trying her damndest to look like she’s trying not to look like Demi Moore), people get turned into vampires.

Nothing new, but it manages to stay entertaining for its 90-minute runtime with the help of the study in contrast between the brothers. It’s an interesting contrast. Stefan (of course his name is Stefan) is the stereotypical angst-to-the-gills pretty boy vampire that have plagued vampire movies for about 40 years.

Radu, however, looks like a vampire that people can actually be afraid of. A little Max Schreck, a little Michael Morbius, a little Klaus Kinski, a little Salem’s Lot. The make-up effects come off as a bit rubbery here and there, but Radu’s Nosferatu claws and blood-dripping dentition are not only menacing, but both fun as hell to watch and exponentially more compelling than the mournful and verklempt Stefan.